PC World is by far the largest technology retailer in the UK high street, but it tends to carry mainstream products. Serious gamers traditionally but their rigs online, from specialist stores. However, KitGuru has just learned that PC World has committed to stocking high-end MSI gaming laptops in at least 70 stores. We spoke with MSI and PC World to understand the new strategy.

The new PC World approach to gaming laptops will centre on the MSI GE62 2QF Apache Pro, which is an updated version of the GE62 2QD that we reviewed earlier this year.

It comes with an Intel Core i7-5700HQ processor, 16GB of main memory, it boots of a 128GB SSD and offers a 1TB hard drive for storage. Gaming is well taken care of with a GTX 970M and, naturally, it has a SteelSeries keyboard, XSplit Gamecaster and Killer Gaming LAN connectivity. 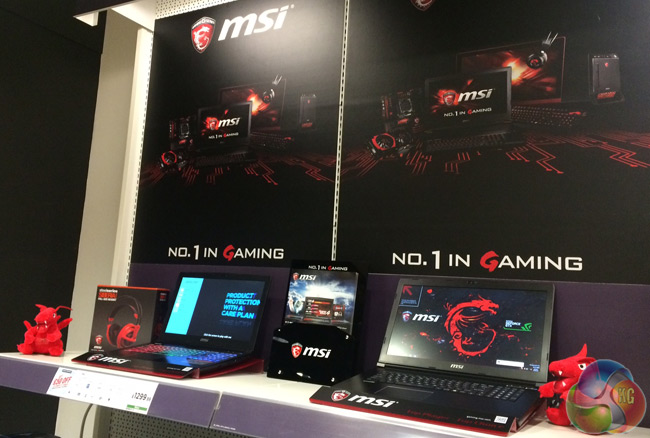 There are two things that are interesting about the pricing: First, the retail price of £1,299 can be reduced by a further £100 if you trade in an old laptop (working with a 12”+ screen and up to 6 years old), so you’d only pay £1,199. Second, the basic instore price is the same as you’ll find online. Given that high street retailers generally demand a figurative pound of flesh in margin, this is no mean feat for a manufacturer.

We spoke with one of the team from PC World in the Games Bunker in the Tottenham Court Road branch in central London. They told us that customers really loved getting hands on with high-end products before buying, which is understandable. They also told us that sales for serious gaming laptops jumped up, once demo units were introduced. 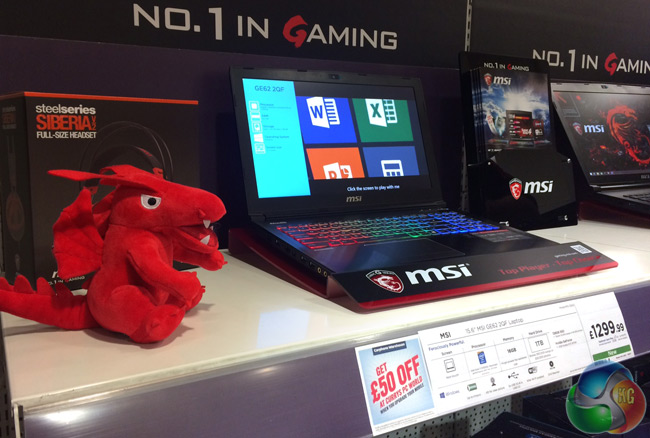 Arjang Salehi from MSI told us, “Having demo units on display gives gamers the chance to see and feel the premium quality of our range. We have unique features that are only available on MSI gaming laptops. Working closely with the team from PC World will give consumers a great deal of confidence. We’re really proud to be partnering with PC World on this program”.

KitGuru says: Only a few years ago, serious gaming on a laptop was a fantasy. Major improvements in CPU, GPU and SSD technology have increased performance, but the overall experience is still tied into the screen, keyboard, audio and overall build quality. Benchmarks on sites like KitGuru will tell you if a laptop will perform in the latest games – but only getting hands on will let you know if you’re getting the quality you expect. If you’ve never seen a modern, high-end gaming laptop in action – we suggest you read some of KitGuru’s recent reviews and go see for yourself.