Microsoft jumped the gun a bit and went live with a listing for the Lumia 950 flagship Windows smartphone today, ahead of its official announcement. There were two devices, the Lumia 950 and the Lumia 950XL, which we have hears about thanks to previous leaks and rumours. The prices weren’t listed but several key specifications, along with images were posted to the site.

The base line Lumia 950 comes equipped with a 5.2 inch 2560×1440 display, a 20 megapixel camera, 32GB of internal storage and it is capable of recognizing up to 2TB of expandable storage. 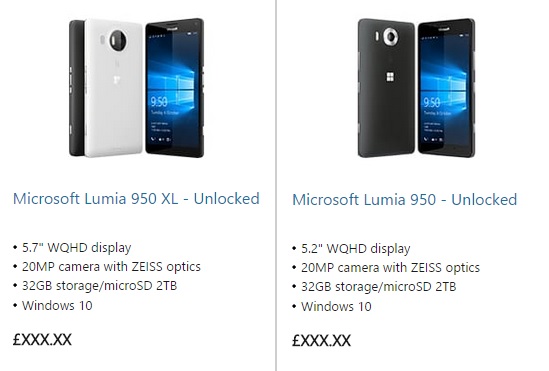 The Lumia 950XL on the other hand will be a larger device, with a 5.7-inch display running at the same resolution. All other listed specs remain the same between the two devices. Obviously these devices will also usher in the launch of Windows 10 for smartphones.

Microsoft’s official announcement for its new flagship smartphones is expected to take place next week at a Windows event in New York. Aside from that, other rumours have suggested that we will see Microsoft launch the ‘Surface Pen’, a new smart cover, while the new phones will sport USB Type-C connections and be capable of wireless charging.

KitGuru Says: Microsoft’s new Lumia devices are expected to be quite powerful, making for a truly capable Windows phone. However, it still remains to be seen whether or not developers will follow and support the platform. Windows Phone has been struggling in that area for quite some time. Are any of you running a Windows Phone? Are you happy with it?