Evan Blass recently retired from his two year stint leaking upcoming smartphone, tablet and wearable tech information under the name EVLeaks. However, he decided to give us a farewell gift- a single press render of the upcoming Moto X+1, which is due to be revealed on the fourth of September alongside the Moto 360 smart watch.

The leaked image gives away a few details, for a start, Motorola is beginning to implement front facing speakers, something that the HTC One has been consistently praised for. The Motorola logo on the back is slightly bigger than the original Moto X and the camera has two small LEDs on it, these will most likely be used for two-tone flash, much like the iPhone 5s. 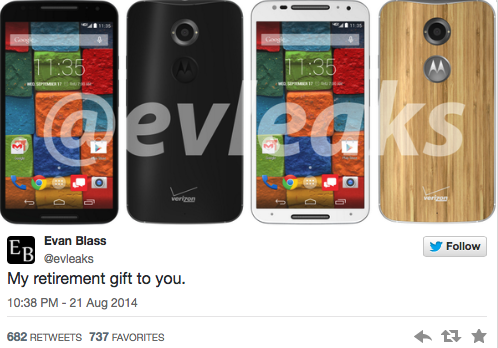 US versions of the phone will have to put up with the ugly Verizon logo at the bottom while European models will hopefully remain clean, with no carrier logo’s printed on. The Moto X+1 appears to be a little wider than the original, suggesting a larger screen.

You’ll notice that one of the devices pictured has a wooden back- this should come as an option in the Moto Maker, which will hopefully be returning for those who want to customise their phones a bit more.

KitGuru Says: We’ve managed to get a good look at the Moto X+1 a couple of weeks before its official reveal but there’s only so much a single image can tell us. We still don’t know the exact specifications of the phone itself. What did you guys think of the original Moto X? I’ve always thought it looked pretty good.