OnePlus has been popping up in the news recently and we'll likely be hearing from them a lot more as we build up to the launch of the OnePlus 7. Last week, we learned that the OnePlus 7 would be avoiding wireless charging technology. However, there will be new features in other areas, with a new display and pop-out camera being among them.

We've seen some smaller smartphone companies experiment with the ‘pop out' camera before, as it helps create a bigger screen to body ratio. OnePlus will apparently be going in this design direction this year, according to OnLeaks. 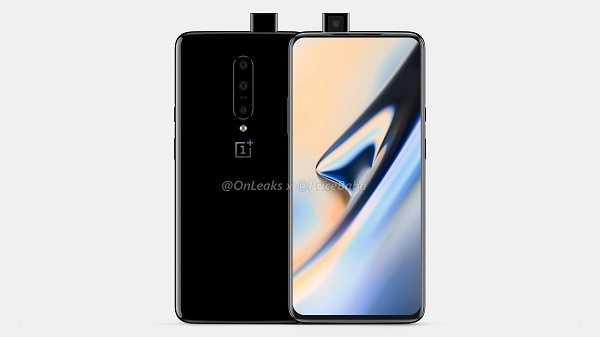 Steve H.McFly, otherwise known as Onleaks on Twitter, posted new images of the OnePlus 7 design over the weekend. The render shows off the new design, with a pop-out front facing camera, a bigger screen to body ratio and similar rear-camera set up to what we've recently seen on the Galaxy S10.

The display itself is set to be 6.5-inches in size, according to pricebaba. Meanwhile under the hood, the device will be powered by a Qualcomm Snapdragon 855 and 6GB of RAM. For battery, we are currently expecting to see an increase to 4,150mAh, up from the 3,700mAh battery found in the OnePlus 6T.

KitGuru Says: The OnePlus 7 is looking very nice, although I do wonder if the pop out camera idea will catch on. Especially now that we're moving towards facial recognition for unlocking phones. What do you guys think of the rumoured OnePlus 7 design? Are you looking to upgrade your phone this year?