We’ve had a lot of big smartphone launches this year already but the year isn’t done yet. Aside from Google’s Pixel 4 launch next month, we are also getting two new devices from OnePlus- the OnePlus 7T and OnePlus 7T Pro. These phones aren’t due to be announced until later this month but as usual, leaks have given us most details well ahead of time.

Originally OnePlus planned to announce its new smartphones in October, but following the latest batch of leaks, the event was brought forward to the 26th of September. Starting things off leak-wise, we have an image of the OnePlus 7T design, complete with a pop-up camera and a large, slim-bezel and notchless display. 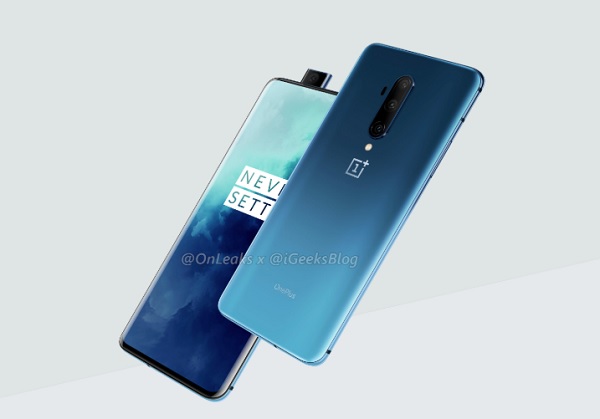 The design here isn’t a huge surprise, with many key elements carrying over from the previous OnePlus 7 and OnePlus 7 Pro. The main differences will be under the hood, with the 7T set to have a decent hardware bump.

According to leaks, we can expect to see a Qualcomm Snapdragon 855+ in the OnePlus 7T Pro, which is designed to run at peak performance for longer periods of time. There should also be 8GB of RAM to back it up and enable smooth multi-tasking.

We are also likely going to be seeing another high refresh rate display, ditching the previous 60Hz standard in favour of a 90Hz display for smoother interactions.

The OnePlus 7T and OnePlus 7T Pro will be announced next week, so we’ll get final spec, pricing and release information then.

KitGuru Says: OnePlus devices have always intrigued me, although I have yet to make the jump back to Android myself. Have many of you owned a OnePlus smartphone before? Are you thinking about upgrading when the new phones come out?