AnTuTu, the Chinese Android benchmarking site has apparently leaked the specifications of Samsung's upcoming flagship device, the Galaxy S6. The original post has since been pulled down but not before other sites could screenshot the details, giving us a peek at some pretty impressive internals.

First things first, the Galaxy S6 will be running Android 5.0 Lollipop and much like most other Android flagships coming out these days, it will also sport a large 5.5 Inch 1440p display. Under the hood we can find a Samsung Exynos 7420 8 core CPU clocked at 1.8GHz along with 3GB of RAM and an ARM Mali-T760 GPU. 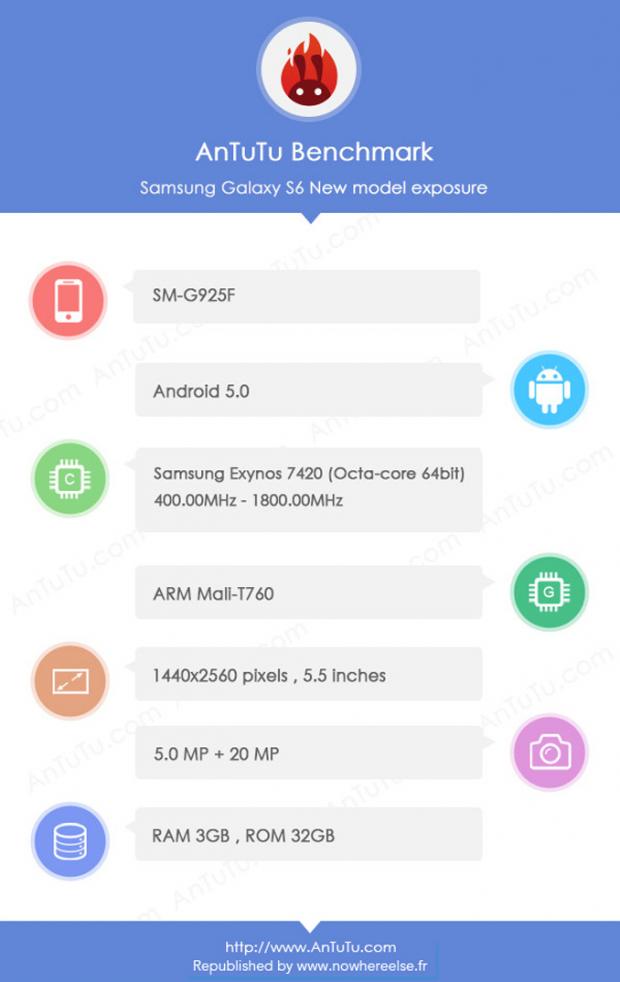 This early specification leak closely matches previous rumors and speculation. On the back of the device will be a 20 megapixel camera and the device will come with 32GB of space, which will hopefully become the new standard for all flagship devices next year.

If these specifications turn out to be true then the Galaxy S6 will be an impressive device. However, spec improvements just aren't as exciting to consumers as they used to be, which is evidenced by the dwindling sales of the Galaxy smartphone lineup.

Samsung has previously stated that it will be going back to the drawing board as far as the design is concerned, hopefully this means we will see a re-designed Touch Wiz as well- Samsung needs to completely revamp its next flagship in order to reclaim its popularity.

KitGuru Says: If this leak is to be believed then the Galaxy S6 will be a powerful device but Samsung needs more than updated internals to reinvigorate its flagship lineup. I'll be more interested to see design leaks. Do you guys still care about phone specifications? Do you think manufacturers should go back to refining the user experience rather than throwing out the same device each year?