The Samsung Galaxy S5 is official and in typical Samsung fashion, it has been packed with features, some useful and some not so much. The phone retains the usual Galaxy flagship look, only this year it comes in a little bigger with a 5.1 inch screen, a beefier camera and the ability to monitor your heart rate.

Following in the footsteps of the Sony Xperia line, the Galaxy S5 will be both water and dust resistant, meaning that theoretically you’d be fine watching videos in the tub but Samsung has pointed out that it’s still not wise to submerge the phone. The general build quality of the device will remain the same which is a shame as HTC set a good example last year with its all aluminium flagship device but for now, Samsung is sticking to polycarbonate.

The South Korean phone maker likes to bring in a slightly bigger screen each year, the Galaxy S3 sported a 4.7 Inch 720p screen, the S4 upped that with a 5 Inch 1080p screen and now on the S5 we’ve got a 5.1 Inch OLED display but the resolution will remain the same at 1080p, which contradicts some of the more persistent rumours suggesting a 2K resolution was on the cards. While the screen resolution and build quality remain the same from last year, one thing the company has upgraded is the camera. It’s jumping from 13MP to 16 and will come with its own image processing chip, focusing will be faster and it has a larger image sensor too. 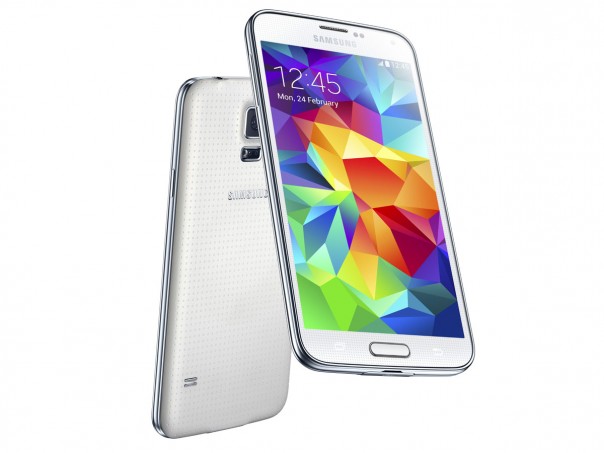 The MWC presentation didn’t bring us news on the processor or RAM but the company was keen to show off its finger print sensor which, like some rumours suggested, is built in to the screen. The finger print scanner will require you to swipe up on the screen and can be used to protect the phone’s apps, settings and files as well as locking and unlocking your phone.

The Galaxy S5 will launch with Android 4.4.2 KitKat on the 11th of April this year, which isn’t too far off.

KitGuru Says: More details are due to come as the Mobile World Congress continues in Barcelona. What do you guys think of the Galaxy S5 so far?