Samsung is set to announce two new smartphones this week at an Unpacked event in New York. We are already expecting the Galaxy Note 5, which has already had its specs leak. However, we will also be seeing a Galaxy S6 Edge+ this week, which has also had its specifications leak ahead of announcement.

Thanks to a Romanian retailer, we now know what Samsung has packed in to the S6 Edge+, with four different models listed. Given that this information wasn’t supposed to be public yet, the retailer has since taken the listings down, though not before PhoneArena could get in there and take screenshots. 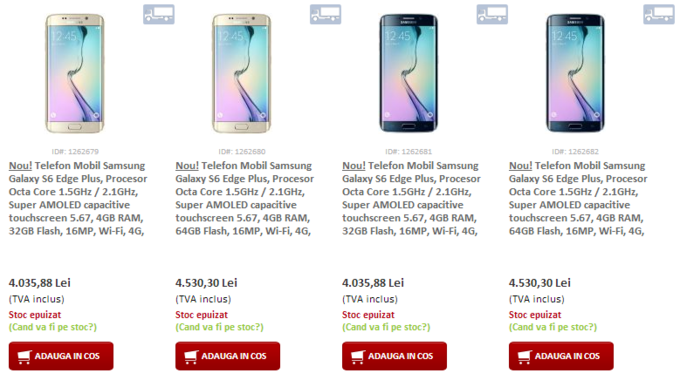 The Galaxy S6 Edge+ will feature a 5.67-inch Super AMOLED 2560×1440 display, protected by Gorilla Glass 4. Powering the device internally with be Samsung’s own eight core Exynos 7420 chip, clocked in at 1.5Ghz. There will also be 4GB of RAM and a Mali-T760MP8 graphics chip.

On the back there will be a 16 megapixel camera with a 5 megapixel one on the front. Finally, for power, there will be a 3000 mAh battery, which seems a little on the low side but these days when it comes to power versus battery life, phone makers tend to opt for more power.

KitGuru Says: Samsung’s Galaxy S6 and S6 Edge haven’t been selling as well as the company hoped so maybe the Note 5 and S6 Edge+ will help turn things around. Are any of you in the market for a new smartphone? Are you thinking about going with Samsung?