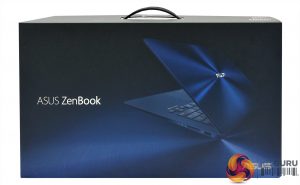 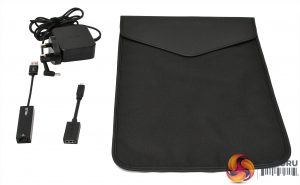 The ASUS ZenBook UX430UA presents a premium appearance from the box onwards. Aside from the notebook itself, you get a protective sleeve to carry it around in. The power supply uses a proprietary connection, rather than USB C. A handy pair of adapters are included in the box.

There’s a Micro HDMI to HDMI adapter, and one for USB 3.0 to Ethernet. So all the most important ports you might miss due to the slimness of the chassis can be reinstated via bundled adapters. 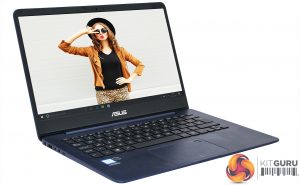 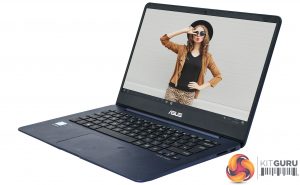 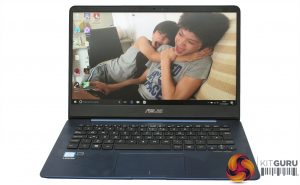 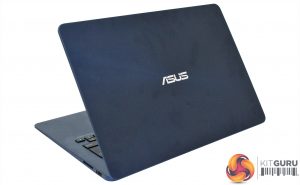 There’s no doubt that ASUS’s ZenBooks are good-looking machines, and the UX430UA continues that tradition. The deep blue of the lid with its brushed metal appearance is a little more ostentatious than a MacBook, but remains the right side of stylish.

The way the blue has been continued in matte form for the rest of the chassis provides a unified look, with black and dark grey making subtle appearances for the keyboard and screen bezel respectively. 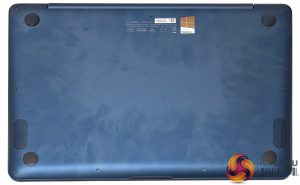 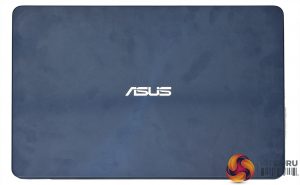 The one niggle for the glossier ZenBook chassis like these is that they are fingerprint magnets (see image above), so you will need to keep giving them a polish to maintain the classy appearance.

Some ZenBooks come with 4K screens, but in the case of our sample, the resolution is a more sane 1,920 x 1,080. This is an IPS panel, so colours are rich. The viewing angles are also excellent. This isn’t the brightest notebook screen we’ve seen, but the matte anti-glare surface means that your view isn’t marred by reflections in bright conditions.

ASUS claims to have shoehorned a 14in screen into a 13in chassis, and has achieved this by keeping the left and right bezel very thin. There is a fair amount of flex in the screen-bearing lid, but it still feels sturdy. Overall, whilst quality doesn’t quite match the metal unibody of a MacBook, it’s still reassuringly premium in feel and appearance. 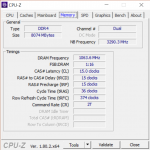 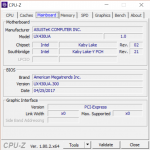 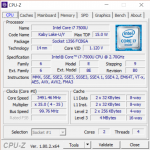 The Intel Core i7-7500U taking central processing duties is a dual-core chip with HyperThreading. It runs at a nominal 2.7GHz with a 3.5GHz Turbo Boost mode, so can provide plenty of grunt when needed. The CPU is partnered by 8GB of 2,133MHz DDR4 SDRAM, which is adequate for an ultrabook, and at least it’s DDR4 when some ultrabooks are still using DDR3. 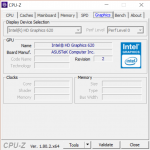 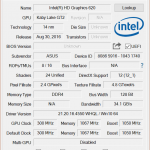 The integrated graphics is Intel’s HD Graphics 620. This provides 24 unified cores running at up to 1,050MHz. It won’t be a match for discrete graphics, but should cope with 3D tasks that aren’t intensive games or professional content creation applications. 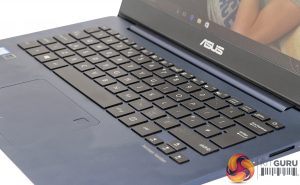 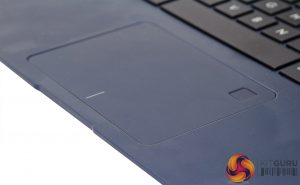 The Chiclet-style keyboard offers decently-sized keys, although the travel is a little shallow. It’s still comfortable enough to work on for long periods, with adequate response and click from the keys for touch-typing. The huge all-in-one trackpad has a biometric fingerprint scanner in the top-right corner, which makes for a pretty streamlined way to log into Windows on bootup. The trackpad is accurate and at its default settings responds well to taps or clicks, depending on your preference.

However, a long-standing niggle we’ve had with ASUS ZenBooks remains. The trackpad is centrally placed, presumably for aesthetic reasons, and this means it’s slightly to the right of the spacebar, and not directly beneath the F and J homekeys you use when touch typing. This makes it more likely than it needs to be that the heel of your right hand brushes against it.

You can dial this out a bit with the trackpad sensitivity settings, but can mean the cursor flies around when typing, with unwanted results. This was particularly pronounced with the first ZenBooks around five years ago, and although it has improved, we would still like to see the trackpad an inch to the left to minimise the issue. 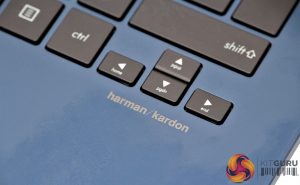 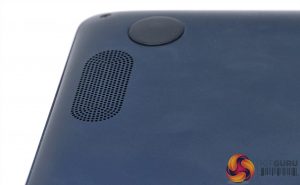 We remarked with the UX390UA that the ZenBook’s Harmon Kardon speakers were a cut above the average ultrabook, and this remains in place for the UX430UA. We’re not sure how often people use notebook speakers – it’s a personal device, and on a train or plane you will be donning headphones. But at least the sound available from the UX430UA is not so weedy it’s an embarrassment. 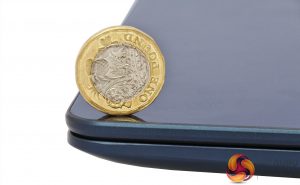 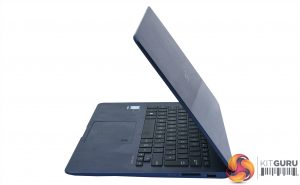 Although the UX430UA isn’t as amazingly thin as the sub-1kg UX390UA, it’s still hardly portly at 1.25kg, and less than 16mm at its thickest point. This is definitely a notebook you could slip into your bag and hardly notice it’s there, which is one of the main aims of an ultrabook. 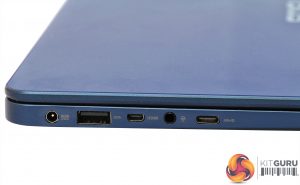 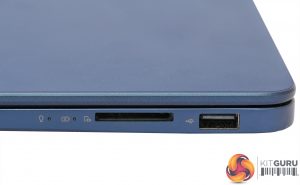 One of our criticisms of the UX390UA was its lack of ports, necessitated by its svelte chassis. The UX430UA is just 4mm thicker, but uses the extra space to good effect. On the left, after the power input is a USB 3.0 port, followed by Micro DisplayPort, a minijack offering combined headphone output and microphone input, then the USB 3.1 Type C port.

On the right can be found USB 2.0 and a SD card reader. As we mentioned earlier, there are adapters included for HDMI and Ethernet, so you’ve got all the important bases covered here. The only niggle is that the USB C port is Gen 1, so offers 5Gbits/sec, not the 10Gbit/sec of Gen 2.

Previous Age of Empires: Definitive Edition pushed back to 2018
Next Qualcomm reportedly files to block iPhone sales and manufacturing in China