Cristiano-phone sells out in 56 seconds

Reports are coming in that ZTE’s ‘premium’ brand, nubia (sic), sold out just as it went on sale. The smartphone, dubbed the Z17 mini, is endorsed by soccer superstar Cristiano Ronaldo and used his mojo to sell out a mere 56 seconds after it was launched in China, having moved an estimated 50,000 units, according to GSMArena. 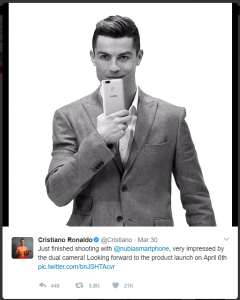 At the core of the 5.2-inch FullHD Z17 mini is a mid-to-high level Qualcomm Snapdragon 652 or 653 (there are two SKUs) with 4 or 6 GB of RAM, respectively, 64GB of storage and running Android 6.0.1 straddled by nubiaUI 4.0. The CMOS sensors are Sony’s handiwork, and the company claims they’re pretty good in low light conditions. nubia also enigmatically claims that you don’t have data limits when abroad, so shooting (photos, presumably), should be hassle-free.

Even though you might not have ever heard of nubia, you can rest assured it’ll make some noise, if only for the fact that last year they signed up soccer superstar Cristiano Ronaldo for a juicy $4 million. It just so happens that Cristiano Ronaldo, like him or not, has a massive following in Asian countries, and the phone is guaranteed to become a massive hit in these markets.

nubia is ZTE’s attempt at launching a premium brand of smartphone with a knack for digital photography, which explains the Z17 mini’s unique dual-camera setup (one monochrome sensor and one colour-sensor). It also tries to fashion itself as a little bit of bling for young users.

The price on the phone is approximately $250/£200, for the ‘standard’ edition. This falls very short of premium until you realise that the company behind it (ZTE) is known for its cheap-as-chips phones regularly sold as ODM designs to telecoms, or as cheap budget phones in retail.

Mid-May will see the Z17 mini reach India and Europe, although there is no official date for a UK or North American launch.

KitGuru Says: This is a smartphone with a bling factor and some decent specifications. However, it is not in the same weight-class as Apple’s iPhone and Samsung’s Galaxy S, so it’s really capitalizing on Cristiano’s name to sell out in Asia. We are curious if CR7 can move units in Europe and the Americas, too…