After the mostly well-received release of the Kraken 7.1 V2 headset earlier this year, Razer has a new pair of flagship gaming headsets on the way. This time, it’s a revision of its Tiamat range, introducing the Tiamat 7.1 V2 and Tiamat 2.2 V2.

The Razer Tiamat 7.1 V2 is the much anticipated sequel to the company’s analogue, true 7.1 surround sound gaming headset. It’s fitted with 5 discrete drivers per ear cup, totalling a sizeable 10 drivers. Each cup is comprised of a 40mm subwoofer, 30mm front (L/R) and centre drivers and 20mm rear and side surround drivers.

The Tiamat 7.1 V2 comes equipped with a new Audio Control Unit that, while bulkier than the V1 ACU, should fix to the desk easier. The ACU allows users to control the volume of each channel, muting of the microphone and also has a pass-through feature for desktop speaker setups. If external microphones aren’t your thing, the Tiamat V2 comes with a unidirectional microphone attached to the ear cup.

The Razer Tiamat 2.2 V2 is, of course, less featured than its big brother coming in as a stereo-only gaming headset. While only featuring a single driver in each cup totalling 2 drivers, both are oversized at 50mm subwoofers that should give a good amount of bass and directional sound. It is also kitted out with the same unidirectional microphone as the 7.1. Since it does require the extra power source from a USB connection, the 2.2 has a standard audio jack meaning that users can use it with almost any device.

KitGuru Says: I will admit that I harbour a bit of a grudge against virtual surround sound headsets since experiencing true analogue & 7.1 surround sound, so this pair has me very interested. What headset or headphones are you currently using? Do you plan on picking up a pair of Tiamat V2s? 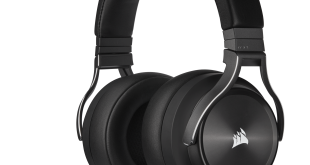