We’re a big fan of Corsair’s mechanical keyboards here at KitGuru. Whether you’re talking one of the newer STRAFE designs, or the earlier K70 variants, Corsair’s mechanical boards tick a lot of boxes. The new line of Lux keyboards is designed to slot into various points in Corsair’s pricing, with per-key backlighting and a MOBA/FPS focus.

Corsair already had a number of high-end keyboard offerings, but the Lux introduction of three new boards has increased it by 50 per cent, so bear with me, getting through all of these might take a few lines.

There’s the K70 Lux, which has single colour backlighting, per-key macro control and a price tag of $120; the K70 Lux RGB is almost identical, though it lets you choose any colour under the sun for your backlighting and costs $160; the K65 Lux RGB is much the same, but it’s tenkeyless, dropping the numpad and its extra keys and bringing the price down to $130, while the K65 Lux Rapidfire changes out the Cherry MX Red/Brown/Blue switches for the SPEED alternative, for $140.

Regardless of which one you opt for though, they all support Corsair’s Utility Engine (CUE) which lets you make all of the customisations behind the scenes.

No UK pricing or availability has been sent our way just yet, but we’ve requested more details from Corsair and will update this piece as and when we hear back.

KitGuru Says: Corsair’s mechanical keyboards are pretty great. Although the dollar conversion is not in our favour, these should still hold up well. Look out for reviews of them in the near future. 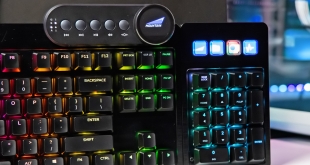 Mountain burst onto the peripheral scene last year with a Kickstarted keyboard, the Everest Max, …