As gamer, of all levels, push the envelope harder and harder – so the control of your in-game character becomes more and more important. KitGuru investigates Roccat’s latest innovation and wonders how useful it will be.

Up on the 10th floor of the Hyatt in Taipei, Computex has evolved into something slightly different. Many companies hire suite in the hotel to show off their latest and greatest inventions to the trade. While not strictly banned, almost no civilians venture into these dark corridors – so there is a much more ‘drop in touch, play, ask questions’ feeling to each room.

Roccat was demonstrating its new ‘Talk’ technology, which allows the keyboard to control mouse functions and vis versa.

While the full range of opportunities that this new technology presents won’t be known for sometime, in the demonstrations we saw, one thing was obvious.

If you’re in a first person shooter type of environment, then the kind of mouse options you need when running through fields or skirting around the outside of a town, might be drastically different from the ones you need when you are in close quarters combat.

With this new system, a quick key press on the keyboard – and the weapons array available on your mouse has changed.

Moving from the outskirts of a town with a sniper rifle, followed by a grenade followed by a machine gun – you suddenly have a semi-automatic as your primary weapon with, perhaps, a shotgun or knife as back-up. Each of these options is programmable.

Various clicks on the mouse can have a similar effect on the keyboard – presumably helping to avoid those annoying ‘little finger stretches’ to achieve a sprint (when storming the walls) or a crouch (when ducking behind cover inside a compound).

Roccat marketing guru, Kathrin Bachmann, was on hand to direct her pro-gamers’ demonstration and it all seems quite convincing.

KitGuru says: We’ll wait until the pro-gamers over at Multiplay have had hands-on with this new technology before rendering a final opinion, but – for now – it is nice to see a company working this hard to innovate.

Comments below of in the KitGuru forum. 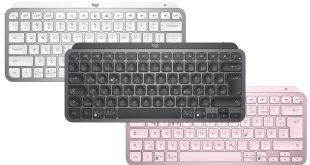 This month, Logitech is launching a smaller, smarter keyboard for creators. The new MX Keys …