Home / Peripheral / Monitors / The Oculus Rift has a challenger

The Oculus Rift has a challenger

When Oculus first began showing us that virtual reality gaming – or at least, head tracking, heavily immersive gaming – was a big future tech that could potentially make a lot of money, we would have been naive to think that no one else would give it a shot. It's taken a while, but now one company has and it sounds even more technically impressive than the Rift itself.

Why? Because the Avegant prototype uses a “virtual retinal display,” to project light directly into a user's eye, whereas The Rift places a small display a short distance from your eye (mirroring such knock out technology as the Virtual Boy). The way the CEO of the company described it to CNET reviewer Tim Stevens, is that it's the equivalent of, “watching a television, versus looking through a Window,” if you compare the Rift to their headset.

There should be no eye strain or risk of damage to the eyeball either, as no lasers are involved. The headset simply utilises a very low power light source, reflected off of several mirrors to project the image right into your eyes.

As it stands the resolution is 1280×800, but because of the technique used to project the image, it's claimed that this results in very little pixelation or screen tearing and it can even output frame rates as high as 240 per-second: more than enough for even the fastest paced game.

Despite all the comparison's being made to the Rift technology throughout this piece, Avengant's CEO doesn't see them as direct competitors though. While the Oculus team is focused on creating a VR gaming experience and Google Glass is offering an always connected, social function, Avengant's prototype is said to be targeting media viewing, giving you the chance to watch films and TV shows in a more comfortable way that's more natural for your eyes.

There is a version that offers head tracking though, that could theoretically go toe to toe with the Rift, though it's unclear from the video how effective this is in comparison to competitor technology.

Currently Avengant is still in the prototyping phase, but we can expect a consumer friendly version to be ready early next year, possibly in time for demonstration at CES.

KitGuru Says: Fingers crossed. Anything that can speed along this sort of head tracking, headset tech is fine by me. 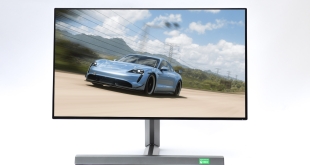 Offering a Nano IPS panel at 4K/144Hz, this monitor is packed with features - but it ain't cheap