If you are hunting for a high capacity USB flash drive to back up, or transfer large amounts of data between systems then there is no doubt that the Corsair Voyager GS 128GB is one of the best we have tested.

Read performance is right at the top of the pile, even outperforming the Patriot SuperSonic Magnum 256GB drive, and the Kingston DataTraveler HyperX Predator 512GB drive. Write performance isn’t quite as impressive, but it is still just a little behind the Kingston and Patriot flagship drives.

Within the last year we have reviewed high capacity USB 3.0 flash drives, but quite often 256GB and 512GB drives are exorbitantly priced,  targeting only a very small audience.

We always felt that if a company could release a lightning quick 128GB capacity drive for under £100 that it would sell well. Corsair were clearly taking notice.

The Corsair Voyager GS 128GB is available from Scan in the United Kingdom for £91.34 inc vat. At this price it is difficult to ignore, especially if you frequently move large amounts of data between several machines at home, or at work. It manages to compete with the fastest 256 GB and 512GB USB 3.0 drives on the market, while only costing a fraction of the price.

Kitguru says: A high capacity lightning quick Flash drive set to target a large audience of users who demand ultimate performance, but for less than £100. 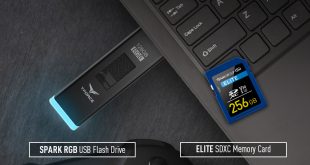