Razer debuted its Chroma-lit Nommo line of gaming speakers back at CES earlier this year, offering a stylish sound solution for desktops. The top-end Razer Nommo Pro now has a release date, completing the range by adding a subwoofer, Pod Controller and THX certification.

The two Dupont Kevlar coated speakers feature the same 3-inch custom woven glass fibre drivers that as its Nommo Chroma predecessor, this time mounting independent silk dome tweeters atop each one. The subwoofer is exclusive to the premium Nommo Pro, contained within a downward firing 7-inch cylinder. 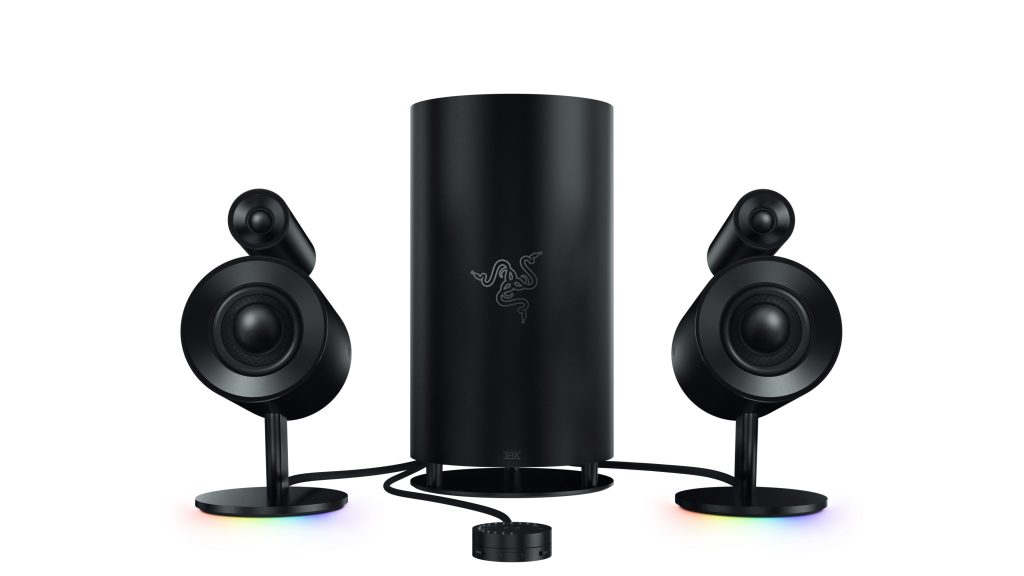 Razer also moves the controls from the base of the right speaker into a dial-shaped Pod Controller for easier access to control volume and power. Fully integrated with Razer Synapse desktop software and the Nommo Pro app, owners can use either to adjust bass levels, switch between equalisers and change up the integrated Chrome RGB lighting.

While the individual tweeters “amplify higher frequencies so subtle in-game audio cues are clear,” clean sound has always been a point of praise for the Nommo Chroma, which is also powered by Dolby Virtual Surround Sound technology. KitGuru’s Deputy Editor-in-Chief Dominic Moass notes of a more bloated bass in the previous model when it’s cranked up, but it remains to be seen whether this problem also affects the Nommo Pro given the addition of a subwoofer.

Razer will be launching its Razer Nommo Pro on August 24th for a staggering £499.99/$499.99 on its website, with selected retailers following later in the year.

KitGuru Says: I certainly can’t knock the style of Razer’s design given its sleek cylindrical look, however the price point does seem quite eye watering. Hopefully the quality proves to be worth it, however we won’t know until we get a hands-on. Does the Razer Nommo series interest you? What do you think of the Nommo Pro?