AMD’s graphics API, Mantle, is entering a “new phase of its development cycle” by launching a private beta programme for game developers to test out the Mantle SDK. In support of the beta, AMD has launched a password protected web portal which will allow those who are allowed access to download the tools to develop for Mantle. 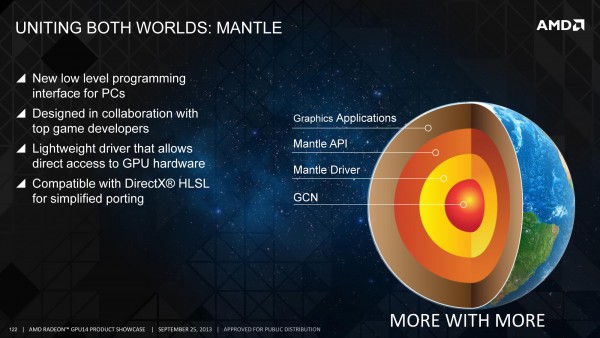 AMD claims that there is “unprecedented demand” for the programme and now that the SDK has “achieved all necessary stability, performance and functionality milestones required to ready it for a broader audience in the developer community.” AMD also said: “Together, AMD and this formidably large community of experienced game developers will not only shape the future of Mantle, but pioneer best practices for working with the low-overhead graphics APIs broadly emergent in our industry.”

For the developers that missed out on the first wave of invitations, AMD is allowing others to register interest for the second wave of invites by emailing [email protected] with the name of their company, name and email of contact point for Mantle access, game title(s) or codenames for which they are interested in evaluating Mantle, and their reasons for requesting Mantle access.

KitGuru Says: It looks like AMD has no intention of abandoning its graphics API in the wake of the Direct X 12 announcement. Direct X 12 won’t be coming until late 2015 so AMD has quite the headstart, maybe this will lead to more games running the API. Have any of you guys tried running a Mantle powered game? What were your performance gains like?