Before digging in to details of the new products, Synology threw some impressive figures into the mix. There are six million active Synology NAS units worldwide with Synology having a 20% rise in global revenue growth and a 30% growth in business segments. The company is now rated No.1 for Midrange NAS.

Over the course of 2018, Synology has re-focused on three main areas; Stability, Security and Service.

Although the beta for DiskStation Manager 7.0 won't be released until Q1 2019, Synology did give us a preview of some of the new features. The interface has been revamped for a better user experience. Synology has also taken steps to improve the UI for mobile users, allowing customers to log on to DiskStation Manager from their phones just by scanning the QR code from the DiskStation Finder app.

The all new CMS 2.0 (Central Management System) can manage up to 10,000 NAS devices making it easier than ever for businesses to roll out large-scale deployments. There is a new and exclusive fast disk rebuild technology which reduces rebuilds based on data usage by up to 40%. Perhaps even more impressive is the HDD Health Prediction technology. Using machine learning from more than 3 million hard drives, the new technology can inform the systems administrator of the probability of a drive failing before the drive reaches that point.

Many smaller businesses have limited IT budgets which inhibits their ability to perform comprehensive and secure backups. To aid these business's Synology are launching its Active Backup Suite later this month, an all-in-one business backup solution which is completely free of license charges.

Launching at the same time as Surveillance Station with DVA is the DiskStation DS1419dva. This is a 4-bay NAS which uses a built-in Nvidia GTX 1050 Ti graphics card together with advanced DVA technologies.

Launching in the UK on the 8th October, the Mesh Router MR2200ac is the world's first WPA3 certified mesh router. It uses a Qualcomm IPQ4019 quad-core SoC and supports AC2200 Wave 3.

Launching at the same time as the MR2200ac is the latest 1.2 version of Synology's Router Manager. Version 1.2 includes an all-new Safe Access package in which you can prevent children from spending too much time on a device by setting time limits and schedules. It integrates Google Safe Browsing and AI.Safe Access as well as other IP and DNS threat intelligence databases and it also supports Siri Shortcuts in iOS 12. 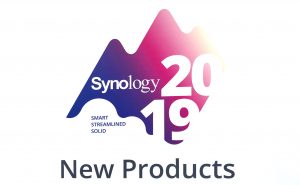 In the small display area, Synology showed off the NAS units that are due to be launched in the coming months.

DiskStation DS119j: A new entry level, single bay NAS which we will have a review of very soon.

UC300: According to Synology up to 25% of Synology users make use of the iSCSI service. To support these users, Synology will be launching a new product line – the UC300 (UC – Unified Controller), the first dedicated iSCSI server with dual-active controller. Powered by a quad-cored Xeon D-1521 CPU backed by up to 64GB of memory it can deliver over 100,000 IOPS performance while ensuring an uninterrupted service against a single point of failure.

KitGuru Says: Synology has a lot of new launches and software updates planned as we get closer to 2019. Keep an eye out for future reviews as new products start to ship.