We will be testing the Buffalo NAS within our gigabit network which is pretty much as good as you will get for the home. It is a mixed network with several 1GBit switches for ultimate performance.

Firstly we perform a native network test to ascertain pure data throughput. The Linkstation Duo drives are arranged in a Raid 0 configuration.

Data throughout is much in line with a less expensive controller, its not disappointing as such, but compared to models in the next price bracket it does seem somewhat slow.

Our local PC has a fast Kingston SSD as the main drive and we are using it to ensure no bottlenecks occur on this side of the testing. Our PC is hooked up to the network and we transfer a 10GB MKV file from the PC to the NAS systems. All three NAS systems are using dual drive Raid 0 configurations with mechanical drives.

The Buffalo system is clearly outclassed by the more expensive units, however it is worth bearing in mind, with the drives included it is under half the price of the Synology D710.

Again, the controller inside the Buffalo clearly isn’t utilising the full bandwidth of our gigabit network, averaging at around 38.7MB/s read speeds.

Next we created a folder of files, 500mb/s in size with a variety of files, from small database documents to larger jpgs and bmps. We expect to pay a slight penalty as we are using Jumbo frames set to 9k, however performance should still be good.

Again as expected the Buffalo is struggling to keep up with the expensive NAS systems we have in our testing labs. Still, this is enough to stream 1080p MKV content in the ‘real world’ so we see no issues considering the low price point.

Noise was measured from half a meter away.

The unit is just as we imagined, basically all but silent to the human ear. We could never really notice it even after writing files for over an hour as the fan never seems to spin up enough to generate any audible acoustics. This is very impressive, especially if this is going to be sitting on a desk beside you during a normal day. 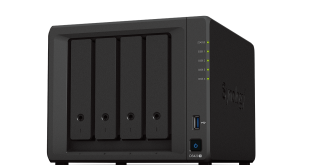