Win an Asus GTX680 courtesy of ARIA and Kitguru!

Thanks to our friends at ARIA we are giving away a stonking, brand new GTX680 from ASUS. We know how tired everyone is coming up to the weekend so this time we have kept the terms of entry really simple!

There is no doubt about it the Nvidia GTX680 is one of the greatest video cards ever released, and we have one sitting in a shiny box, ready to be enjoyed by a lucky reader.

First, let us take a quick look at the prize. If you can't wait you can buy one from ARIA now!

NVIDIA® 3D Vision™ Surround Ready
With a single GeForce GTX 680 you can expand your PC games across three displays in full stereoscopic 3D for the ultimate “inside the game” experience.* NVIDIA® Surround™ also supports triple screen gaming with non-3D Vision monitors. Add in a fourth accessory display to get access to your email, web, or other applications while you game.

NVIDIA GPU Boost Technology
Dynamically maximizes clock speeds based on workload of the game to push performance to new levels and bring out the best in every game.

Dual-link DVI
Able to drive flat-panel displays up to 2560×1600 resolution over a DVI connector.

DisplayPort
Drive the latest DisplayPort panels with support for resolutions up to 2560×1600.

So how do you enter?

it is really easy.

(or if you have an active forum account on Kitguru or ARIA forums and don’t use Facebook then email us your user name instead).

Then email us the answer to a really simple question.

‘Which of the above images shows the CEO of Nvidia?'

When you have the question sorted, email Kitguru (competitions (at) kitguru.net) with the subject line ‘I ain't clowning around, I want a new GTX680!’, along with your answer (a, b or c), full address and telephone number in the main email text.

This competition is open to residents worldwide.

The competition will close 10th July 2012 and the winner will be announced by the 20th of July 2012. The prize will ship within the following two weeks. Please note that KitGuru will use your email address for future mailing lists. You can unsubscribe from these emails at any time. We do not give your email address to any third parties, we value your privacy. Please note that multiple entries with the same shipping address will be blacklisted.

Comments are closed. This is an email entry only competition. 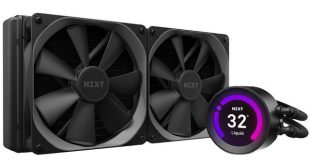 For day 8 on the KitGuru Advent Calendar 2021, we are teaming up with NZXT to give away TWO prize bundles! Two winners today will get a PC upgrade bundle featuring the NZXT H510 Flow chassis, a Z63 AIO liquid cooler and a C650W power supply...