Overclockers UK’s second round of Black Friday deals are up

Update 20/11/2017: Overclockers UK has now released its second wave of deals, with more cases, gaming chairs and power supplies being slashed in price, as well as introducing the much sought after RAM, processors and graphics cards into the mix.

Overclockers UK is kicking off its Black Friday sales with a bang in the run up to the 24th November, cutting the prices off cases, mice, keyboards and much more. Of course, many of these deals are subject to availability as stock is sure to fly off the shelves, so best grabbing what you want sooner rather than later. You can browse all OCUK has to offer here, but we've created a breakdown of some of the best deals going up today by category. For your convenience, deals that we know have sold out or been made unavailable have been struck through: 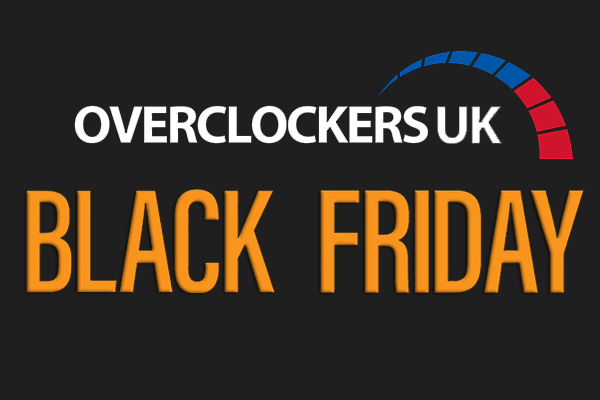 There are things to factor in when buying a case, such as its size, color, how silent it can be and whether or not it shows off the components you’ve spent hundreds on. For those looking for room, Overclockers UK is offering £40 saving on the NZXT Phantom 820 and the CoolerMaster CM Storm Stryker, bringing each down to £164.99 and £114.95 respectively. The Corsair Graphite 760T V2 Windowed version takes the cake for best savings on full towers, however, slashing its price from £174.95 to £129.95.

For something a little more silent, perhaps Fractal Design’s Define R4 or newer Define R5 are a little better, reduced to £64.99 and £84.95 respectively. If not, be quiet! will have you covered with its Pure Base 600 in both Orange and Black Windowed versions coming down to £74.99.

For those wanting to show off a little more, Corsair’s Crystal 460X Midi Tower with tempered glass is only £92.99, or if space is less of an issue, Phanteks Enthoo Evolv Shift X Mini-ITX in both Black and Gunmetal Grey shows off everything in its compact form-factor for just £124.99 down from £149.99.

Update 20/11/2017: More cases have been added, such as BitFenix' Phenom MATX Cube Nvidia Edition in both Black and White going down to £49.99 each. More Phanteks cases are going down in price, with the Enthoo Evolv Micro-ATX Glass in Silver and Gunmetal Grey now £99.95 from £119.99. The Corsair Obsidian 900D Super Tower Case is getting the biggest cut this time, with its £304.99 providing customers a whopping £80 saving.

Update 20/11/2017: Overclockers UK is bringing some more high-end power supplies your way for Black Friday, starting with Kolink's Continuum PSU offering 1200W 80 Plus Platinum rated, with modular functionality for just £159.95. If Platinum isn't enough for you, however, Silverstone's Strider in both 1100W and 1300W at Titanium rating are currently available for £219.95 and £244.95 respectively.

The ASUS ROG Gladius also gets a price cut down to £35.99, alongside Cougar’s 700M Laser gaming mouse, which is a little more expensive, but more of a saving at £39.95.

More often than not, you’re going to want to pair a good mouse with an even better mouse pad, ensuring you get the most out of your money. OCUK has its own brand covering Medium, XXL to 3XL sizes starting from £7.99. If RGB is more your style, then you’ll want to grab the Corsair MM800 RGB Polaris mouse pad for £42.95 while you can.

Many Cooler Master keyboards are going on sale, from its premium Masterkeys Pro L RGB, now £89.99 to its starter kit, the Devastator II Combo with blue lighting, bringing a keyboard and mouse together for £27.95.

Some of the best savings on headsets are found within bundles that Overclockers UK is offering, with the SteelSeries Arctis 3 7.1 Surround Gaming Headset in White or Black being grouped with a free Rival 100 mouse and Qck Mouse Pad, all for £89.99.

SteelSeries Arctis 7 Wireless receives the same treatment, again in White or Black, bundled with a Rival 500 mouse and Qck Mouse Pad for £159.95.

Moving on from bundles, the SteelSeries X300 headset, boasting compatibility across PC and Xbox 360/One is down to £53.99. Alternatively, the Creative Sound BlasterX H7 Tournament Edition is down to £89.99, or you can play like the pros with in-ear BlasterX P5s for £49.99.

Seating is an incredibly overlooked when building a system, but if you’re going to be sat at your desk for long periods of time then it’s important to sit comfortably. Nitro Concepts can help with that with its E200 Race Series going as low as £114.95 for its Black and Black/White versions, while the Black/Carbon is a little more expensive at £119.99. noblechairs also weighs in with its EPIC Series in White, dropping from £299.99 to £259.99. This model in particular is a KitGuru “Must Have”.

Update 20/11/2017: OCUK has targeted Vertagear's Triigger Line 275 Gaming Chairs in Black/Blue, Black/White, Black/Red and just Black, all down to £399.95, saving a whopping £130 from its usual price tag. DXRacer also joins the Black Friday madness with its Sentinel Series Gaming Chair in Black/White slashed down to £349.99, and lastly, another noblechairs EPIC Series reduction, now offering the Real Leather Brown/Black for £429.95.

Before looking at this section, please be mindful of socket compatibility regarding CPU coolers, sizes of radiators of all-in-one coolers in comparison to your case and the correct sizes for chassis fans.

If air cooling is more your preference, Phanteks' selection would be better. AMD users have the choice between the PH-TC12DX Black version at £32.99 and the PH-TC14PE in silver at £46.99. Unfortunately, these don't support AM4 or TR4 sockets natively, but the former can be purchased separately and the latter is available as a free upgrade from Phanteks support. Intel users can turn to the PH-TC14CS in both Blue and Silver or the PH-TC14PE in black for £46.99 each. Otherwise, there's always the versatile Cooler Master Hyper 212 down to just £19.99.

Case fans are also getting a nice reduction, with Spectre Xtreme 120mm of all colors, including Blue, Green, Red and White for £7.99. If you can't decide what color you want right now or fancy a change down the line, Corsair's HD140 RGB LED 140mm PWM fans are being cut to £17.99 each or a dual pack including the controller for £45.95.

Introduced during Overclockers UK's second wave of Black Friday deals, a lot of love is given AMD's way. Any purchase into its 500 series line while on deal is paired with a Steam Code for Quake Champions, and luckily, there are many variants to choose from.

AMD's latest line of Vega cards are also dropping in price, with Power Color, Sapphire and Gigabyte offering their RX Vega 56 8GB cards for £389.99 each. The high-end RX Vega 64 is down to £469.99 from both Gigabyte and Sapphire, while Power Color comes in at a better saving, costing 458.99.

More love for AMD during this Black Friday sale, as Ryzen 5, 7 and the large Threadripper go down in price. All reduced Ryzen processors are also accompanied by a Steam code for Quake Champions. Please note that you will need a compatible motherboard with the correct socket.

Given the silicon shortage and subsequent price rise, this Black Friday is perhaps the best time to buy some new RAM for a long while to come.

The deals here are just highlights of what Overclockers UK has to offer, with plenty more on the way. This article will be updated accordingly, so keep your eyes peeled! Do note that prices are subject to change at any moment depending on availability.