We tried out Overclockers UK roomscale VR set up, and loved it

Do you want to try out virtual reality but don't have a friend with a headset? Do you know such a person, but don't have enough space to really test it out? Then never fear, we have found a solution. Overclockers UK in Stoke on Trent, is now offering roomscale, HTC Vive tests for anyone that wants one. To make sure it's up to scratch though, we went along to test it out.

Fortunately the set up Overclockers has put together is a strong one. Just inside its expansive show room, is a room offering 20 square metres of VR space, along with a couple of seats for your friends to perch on, a HTC Vive headset and plenty of games and experiences for you to try out.

Although this writer wore in his VR legs quite some time ago, it was great to have so much space to play around in. I suffered through the blinking gaze of the gigantic blue whale in Into TheBlu, shot up a few robots in Space Pirate Trainer and created – I think you'll agree – some Van Gogh-like masterpieces in TiltBrush.

If you come along to try out the Overclockers UK VR experience yourself, you can expect to try all of these, as well as Job Simulator and a number of other games, for up to 20 minutes at a time. You will need to book online to do it, so don't just head down without warning, but it's a simple process and there's often enough time for everyone to have a go. 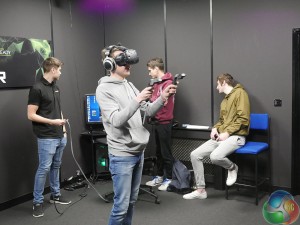 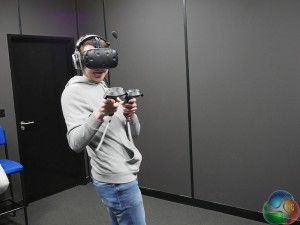 We weren't the only ones enjoying the roomscale VR setup 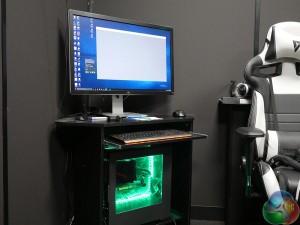 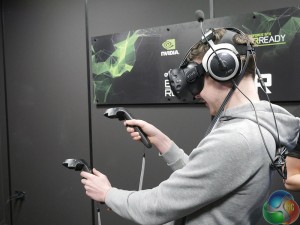 Of course though, Overclockers isn't doing this because of its altruistic nature: it wants to sell you on VR. That's why if you complete your demonstration and want more, you can buy a Vive direct from OCUK. Don't expect it to show up next week – the rest of us still need our pre-orders, but once those are cleared, expect OCUK to begin shipping them out.

If you don't have a ready set up either, never fear, OCUK has that covered too. The system we played on at the Overclockers headquarters was its Titan Virtual Force (link HERE), but there are a number of other more affordable systems, laptops and VR bundles you can pick up instead if you prefer.

Overall, we enjoyed the roomscale experience a lot. Although we're big VR fans, it's difficult to create that much space in our own home.

KitGuru Says: Do any of you live near enough to Stoke that you're thinking about making the trip?