Towards the end of last year, HTC released the VIVE Cosmos, a wireless, standalone VR headset to compete with the Oculus Quest. Now for 2020, HTC is rolling out three more headsets, including the higher end Cosmos Elite, a cheaper version of the standard Vive Cosmos and an all new Cosmos XR.

The Cosmos Elite comes with Steam VR tracking stations, so you can use it to replace the original HTC VIVE completely. It also comes with the HTC external tracking plate pre-installed, which is a £200 upgrade over the original Cosmos headset. Aside from the addition of Steam VR tracking, the headset remains the same, so you won’t be getting much in the way of visual or audio upgrades.

The external tracking plate will also be sold as a standalone product, so if you buy the entry-level Cosmos, you can get the tracking upgrade later on. 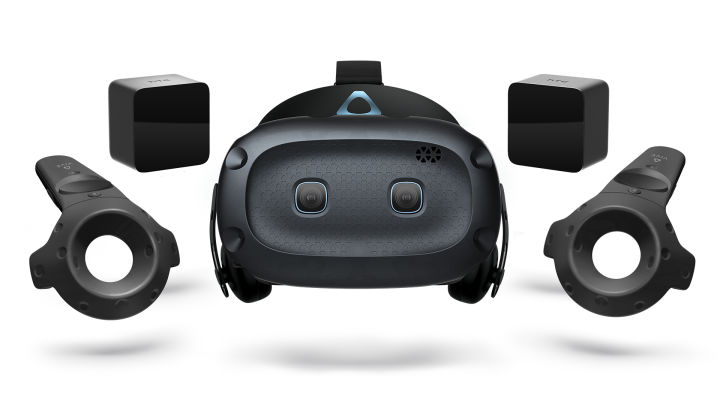 With the Cosmos Elite being the new flagship, a new version of the standard Vive Cosmos is now the entry-level headset. Like the Rift S, it uses ‘inside out’ tracking via six cameras on the headset itself. You still get the same screen as the Elite, so if you can live with lower-end tracking but high-end visuals, then this is the headset to grab. You can always upgrade to the full high-end experience later on by picking up the external tracking plate add-on.

The HTC Vive Cosmos XR does things a bit differently by adding additional cameras to support Augmented Reality content in addition to VR. The extra two tracking cameras allow for a 100-degree field of view in AR. HTC’s first demonstration of this technology comes in the form of VIVE SYNC, software that allows you to bring virtual items into your real-world surroundings. This headset is primarily geared towards developers though, similarly to Microsoft’s Hololens.

The HTC VIVE Cosmos Elite is going to cost $899 in the US, which should roughly translate to £750 here in the UK. The standard VIVE Cosmos will be $699, or roughly £650 in the UK. We currently don’t have pricing information on the XR edition but we’ll update when those details come through.

KitGuru Says: Steam VR tracking does seem like a significant upgrade, although I’m not sure many will want to spend an extra £200 for it. What do you all think of the VIVE Cosmos lineup? Is this something you would consider over something from Oculus or Valve?