Microsoft’s all-digital Xbox One S to launch in May

Late last year, we heard rumours that Microsoft was planning to launch a cheaper ‘all digital’ version of the Xbox One S without a disk drive. Now, that seems to be confirmed, with the retail packaging leaking, alongside details on pre-installed games.

Microsoft’s all digital Xbox One S will ditch the Blu-Ray drive in order to shave off some of the cost. The rumour is that this version of the Xbox will start at the $200 mark. Judging by box art leaked by Windows Central, buyers will get a free copy of Minecraft, Sea of Thieves and Forza Horizon 3 (not 4) included. Of course, the box is also likely going to come with a free trial for Game Pass, which will give access to even more titles, including Shadow of the Tomb Raider, Just Cause 4, Forza Horizon 4, Halo, Gears of War and more. 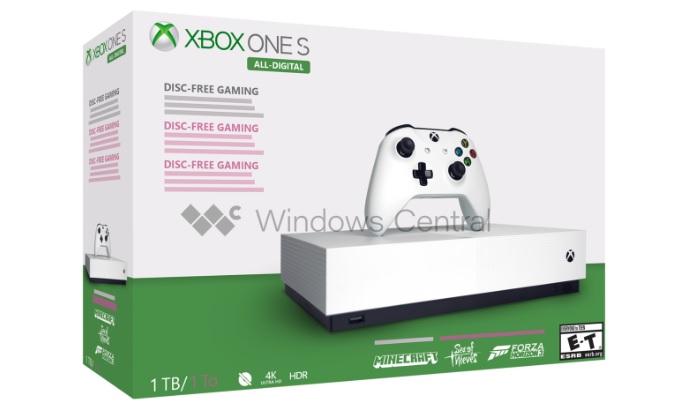 Apparently, the all digital Xbox One S will be releasing on the 7th of May. With that in mind, Microsoft is likely going to announce and launch pre-orders for this fairly soon. Personally, I think it is safe to assume that this will get a mention on an episode of Inside Xbox next month.

KitGuru Says: While I have a few physical games for my consoles, I have been digital-only for a long time now. This won’t be for everyone but giving people a cheaper, disc-less option seems like a good idea, especially this late into the console cycle.

Previous Upgrade notifications return to Windows 7 as end of life date looms
Next Shadow of the Tomb Raider – RTX and DLSS benchmarked!