In April 2017, prior to the Xbox One X’s official launch, we learned that the console would in-fact support AMD’s FreeSync variable refresh rate technology. This was big news at the time, as typically, features like FreeSync have been reserved for PC gamers only, making the Xbox the first console to support it. The feature wasn’t there at launch, but today, AMD and Microsoft jointly announced that FreeSync 2 is finally landing on console, for both the Xbox One X and Xbox One S.

For those who don’t know, FreeSync is a technology that allows the GPU to dynamically control a display’s refresh rate, forcing the screen to only display the number of frames a system can push out at any given moment. This has two effects, smoother/stutter-free gaming and the removal of screen tearing. There is a catch though, you do need a FreeSync compatible display to take advantage of this feature. This is present in a lot of gaming monitors these days, but it does not tend to be present in TVs. Fortunately, the Xbox One X also natively supports 1440p resolution with Super Sampling too, so gaming on a monitor may end up being a good option for some. 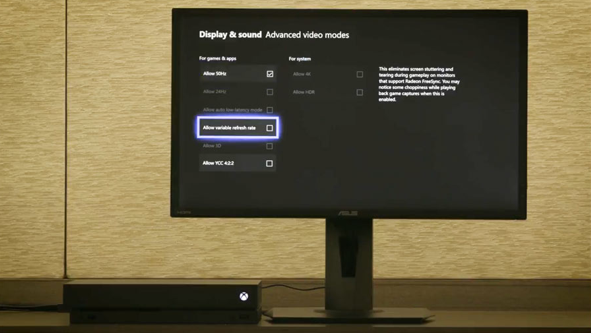 Currently, the majority of console gamers play on a TV and sometimes, they forget to switch on Game Mode for their TV to ensure low latency input. Thanks to HDMI 2.1, the Xbox has been able to implement an auto low latency mode, so the console will detect when you are running a game and automatically switch your TV over to ‘Game Mode’ for optimal response times. It will then switch back off when you leave a game and start using media apps like Netflix or YouTube.

Both of these announcements were made on the latest episode of Inside Xbox, which is finally making a return after a several year-long hiatus.

KitGuru Says: I’ve been a long-time user of G-Sync for my gaming PC, so I’m glad to see similar variable refresh technologies make their way elsewhere. Currently, FreeSync will only be useful to Xbox gamers with a supported monitor but hopefully one day, TV manufacturers will also start supporting the feature, given that it costs nothing to implement it.