In the graphic design universe, Wacom has become the definitive name in tablets.  Most graphic artists and Adobe aficionados will break into something of a cold sweat when ponding the swap from loyal mouse to unknown tablet – but there can be some remarkable improvements to your life if you pick the right product. KitGuru feared losing a limb, but was actually pleasantly surprised by the Wacom Intuous5 Pen and Touch Medium Graphics Tablet. We rapidly overcame the inevitable disconnect between eye and hand.

The Intuous5 pro medium has been designed to capture the eye of pro designers. But could it do more for other users as an entry level tablet?

We spent around ten days testing the latest Wacom device to see if it could cut the mustard and actually become a replacement for the faithful standard, the optical mouse.

We soon discovered that Wacom have included in this range of tablets a touch of genius for the dedicated followers of all that is Apple, and even PC users.

Not only is this a tablet, but it also includes many of the features of the Apple track pad. Users can pinch and expand their digits to their hearts content, which we found to be a useful feature that has the capability of capturing a wider audience than just the dedicated graphic designer. 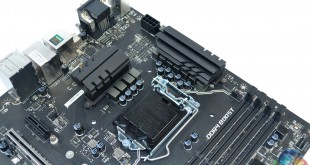