The New American Foundation think tank has just released a new report which suggests that the NSA’s mass surveillance programs have almost no impact on the prevention of Terrorism and that more traditional methods like local law enforcement, community tip-offs and informants are much more effective.

To determine how effective the NSA’s data collection actually was in investigating and ultimately capturing terrorists, the NAF looked into the cases of 225 individuals who were indicted, convicted and in some cases killed following the 11th September attacks in 2001. These people were then divided into categories based on how they came to the attention of the NSA, some of which were down to phone metadata, some from more detailed surveillance that was allowed if a non-US citizen was (loosely) involved and other methods, including tips from family members and friends and informants close to the person. Self disclosure through video was also a common one.

Ultimately the NAF found that just 1.8 per cent of terrorist related cases, were aided by the use of US Citizens’ phone metadata. More in-depth surveillance of non-US civilians also did very little to aide investigations, with less than five per cent of cases benefiting from the intrusive spying.

“Surveillance of American phone metadata has had no discernible impact on preventing acts of terrorism and only the most marginal of impacts on preventing terrorist-related activity, such as fundraising for a terrorist group,” concluded the NAF in its breakdown of the report. 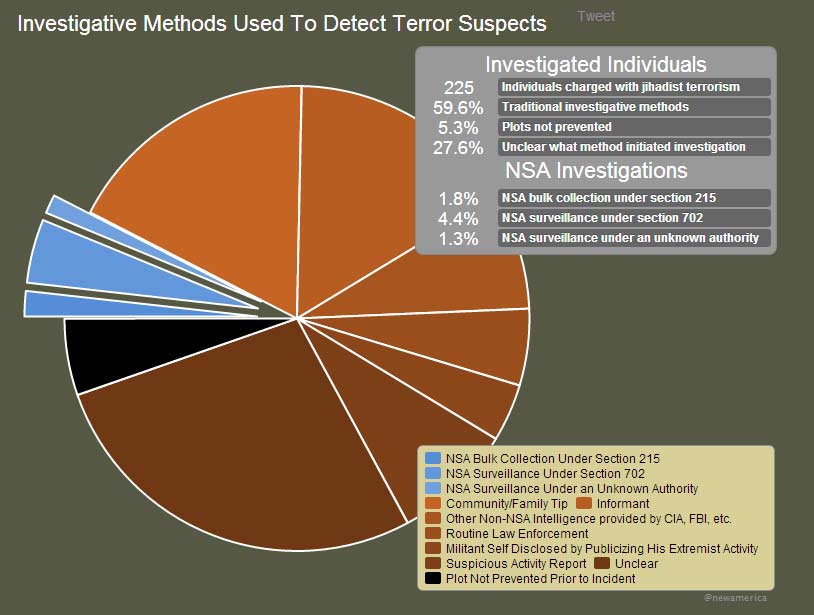 Either the NSA is going on a strict diet, or its data collection does very little

This is evidence that can certainly be backed up by the NSA’s own statements on the matter. Soon-to-be ex director of the NSA, General Keith Alexander stated in mid-2013 that his agency’s efforts had stopped over forty different terrorist attacks. He later said however, that that number was more like one or perhaps two and even in those instances, it wasn’t actual attacks that were prevented and the original tip-off came from British intelligence.

Ultimately, the report concludes, the NSA doesn’t need better access to the data, or more of it or better methods of acquiring it, it simply needs to get better at sharing that information with other agencies, as several instances are cited where if there was better communication between the NSA and FBI, terrorist suspects could have been investigated much earlier than actually happened.

If you want to read the full report, you can do so here.

Kitguru Says: Not the most surprising results but a damning indictment of NSA success rates. It also really helps further the case that the freedoms being sacrificed in the name of security, are really not paying off.