The big problem with the latest SimCity game when it was released, was that it was an online-only game. This not only angered players that wanted to enjoy the game alone, in single-player mode – as they had done with previous generations of the game – but also because it meant that of course, the servers crashed when everyone tried to connect shortly after launch. Thanks to these issues, from day one players have been screaming for an offline mode for the game and finally, almost a year after the release, Maxis has now planning to debut a single player mode for the game, to cries of “well about time,” but it was apparently a much bigger job than anyone realised.

Simon Fox, lead engineer for the single player mode for SimCity has been talking about its development over at the game’s blog, suggesting that the real reason the game was online to start with wasn’t to restrict mods, or add a layer of DRM, but to make it so that all cities were interconnected to one another. On top of that, the engine was written with server interaction in mind, so there was less consideration for optimising certain aspects for consumer hardware. Therefore, when it became obvious that Maxis had to do something about gamer requests for offline play, they’d need to not only rewrite that code from one language to another, but they’d have to optimise it too – which is another reason cities have remained smaller than in previous SimCity games. 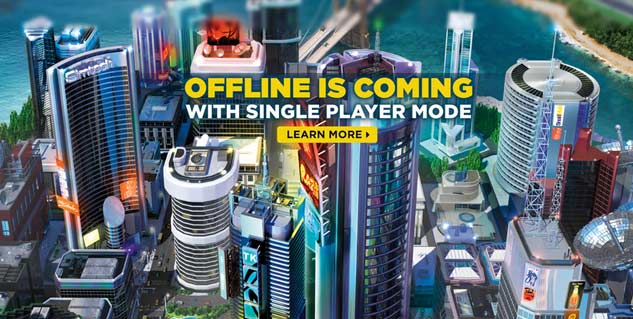 “The game routinely pings the servers for critical pieces of data (region status, workers, trading etc.) and it relies on that information to keep the simulation moving,” said Fox. “This meant rewriting the entire system, which previously existed in Java, and putting it into C++. We’ve had to knock out the internet pipe stuff. There’s lots of code that hits the servers looking for information. We’ve had to write a lot of code to produce that data locally, specifically for region information.”

There was also a lot that had to be stripped out, because it simply wouldn’t function on single player. However, with many of those features being big parts of the online game world, doing so could have caused knock-0n problems for multiplayer: “This means removing lots of code integral to Multiplayer include code and UI supporting Trading, Social Features, Global Market, Leaderboards and Achievements. And, all without crippling the Multiplayer game,” Fox continued.

Currently the single player update is in Alpha and the final testing is being completed before it’s pushed into beta for the next SimCity update. How long has it taken them to get this far? Over six months. They’ve been at it since August.

“Lucy once said that Offline wouldn’t be possible “without a significant amount of engineering work”, and she’s right. By the time we’re finished we will have spent over 6 ½ months working to write and rewrite core parts of the game to get this to work.”

KitGuru Says: While I’m sure there are some legitimate reasons that Maxis kept it online only to start with, I’m not sure I buy the idea that it couldn’t have been made offline as well to start with, because keeping it online seemed to limit players rather than open up possibilities.

At least finally people can play the game how they want to, but is it too late? What do you guys think?