Intel Corp. has slightly re-scheduled release dates for its upcoming Xeon E5 v4 and Xeon E7 v4 central processing units for servers. Instead of late 2015, the world’s largest maker of microprocessors will launch its new server CPUs in the first half of 2016. The reasons for the delay are unclear, but Intel has delayed various chips made using 14nm fabrication process for a number of times.

The new Xeon E5 v4 2600-series “Broadwell-EP” central processing units with up to 22 cores for single-socket and dual-socket servers will be released in Q1 2016, according to CPU-World, which cites sources with knowledge of the matter. The Xeon E5 v4 4600-series chips for servers with up to four sockets will be launched in the Q2 2016. The processors will integrate quad-channel DDR4 memory controller that will support effective memory clock-rates up to 2400MHz. The chips will feature 55W – 160W thermal design power.

The higher-end Xeon E7 v4 “Broadwell-EX” central processing units for real-time analytics, mission-critical and other advanced machines with up to eight sockets will be released in the second quarter of next year. The chips will integrate up to 24 cores as well as a large last level cache (up to 60MB, according to unofficial information). The CPUs will feature two dual-channel DDR3/DDR4 controllers that will work with memory modules via special scalable memory buffers (SMBs) at up to 1866MHz effective clock-rates.

The Xeon E5 and E7 “Broadwell” microprocessors for servers should be drop-in compatible with existing “Grantley” and “Brickland” platforms and are not expected to bring a lot of innovations, except support for TSX instructions, some custom features for select clients, DDR4 memory at 2400MHz clock-rate as well as some other enhancements. Still rather substantial increase of core-count compared to existing CPUs will make the new processors significantly faster in numerous applications. Besides, usage of 14nm process technology could bring down their power consumption and/or increase their frequencies. 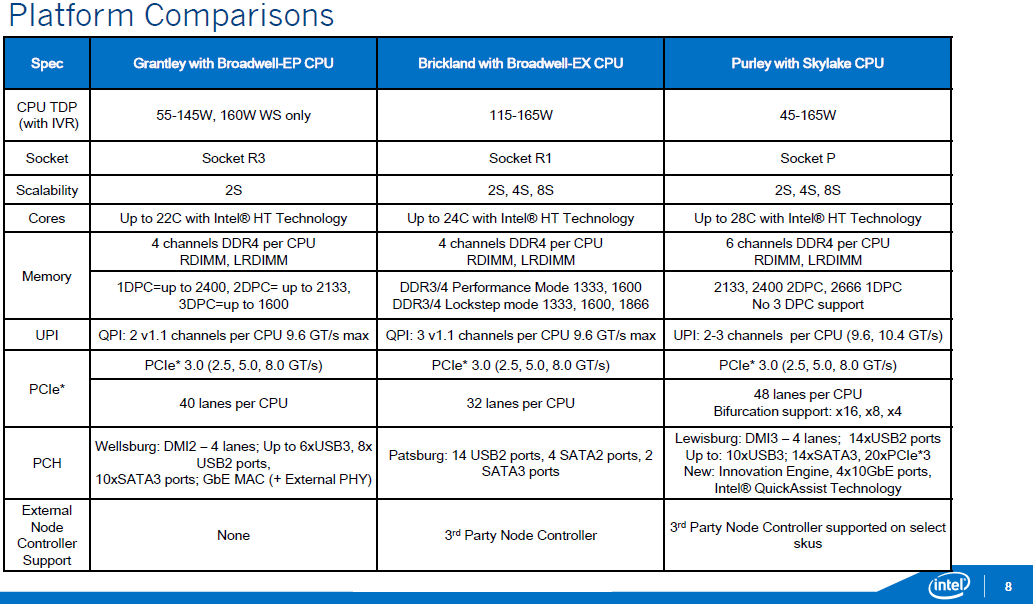 Intel generally releases server-class Xeon processors noticeably later than client chips based on the same micro-architecture. Server makers and datacentre owners want to ensure that the new microprocessors work fine in different configurations, which requires a lot of tests and evaluations before selling new machines or deploying them.

KitGuru Says: While the delay is not something that chipmakers or server makers are glad about, it should be noted that it will hardly materially affect Intel’s financial results. The company continues to dominate the server market with 98 – 99 market share as it simply has no rivals.

Previous ARM ups expectations: ARMv8 to be in 25% of servers by 2020
Next MSI unveils Night Elf: Inexpensive Intel B150 mainboard for gamers