Sapphire has announced that it has begun shipping the Radeon R9 Nano, AMD’s latest graphics card that packs the full power of a Fury chip on to a tiny 6-inch PCB, featuring High-Bandwith Memory (HBM) along with support for DirectX 12, which is starting to be implemented in to games on the PC.

Judging by our review, there is no doubt that the Nano takes the performance crown for its size class. The Sapphire Radeon R9 Nano typically runs at 175 watts under gaming load, making it extremely power efficient. The card itself is cooled by a single fan, which keeps the chip at around 75 degrees Celsius under load. 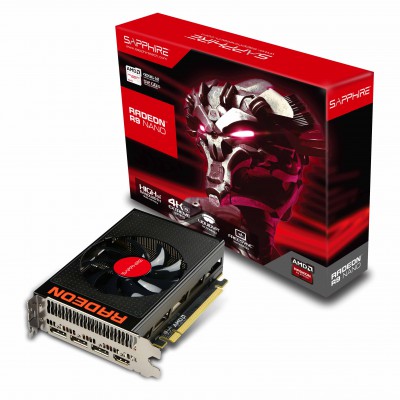 Obviously the other big selling point for AMD is DirectX 12 support, as we head in to next year support for the new API will become increasingly important and should provide a notable performance boost in systems that properly support it. All of the usual AMD technologies are also supported, including Eyefinity, CrossFire, FreeSync, VSR and Liquid VR.

The Sapphire R9 Nano can be found on Overclockers UK for £529.99 and is readily available, so you won’t have to wait long if you decide to pull the trigger on one.

KitGuru Says: The R9 Nano is an impressive card for its size. Are any of you thinking about grabbing the Nano?