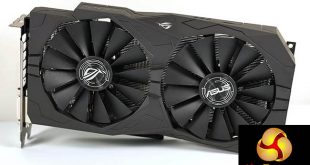 Today is the second of AMD's recent graphics card releases. While AMD sampled reference solutions for RX 480, they are relying on partner cards for the RX 470 launch. Today we take a close up look at the Asus RX 470 Strix Gaming which arrives with a custom cooler, RGB lighting and enhanced ‘out of the box' speeds. 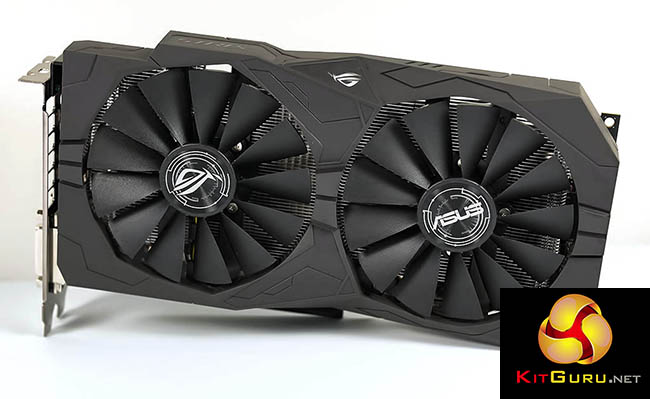 In AMD's literature they claim the RX 470 can handle ‘high definition gaming above 60 FPS+ at max settings'. Yes, they obviously mean 1080p. Thankfully today we don't have to focus on one of their reference cooled cards and can invest our time into the rather subdued, yet lovely looking Asus RX 470 Strix Gaming card.

The Asus card features a Direct CU II cooler with patented ‘wing blade' fans which deliver high air pressure. In a similar fashion to their high end models, the card is equipped with Aura RGB lighting and has customisable colour decals to let you express your own style. This card has 4 pin fan headers on the PCB allowing additional fans to be controlled directly from the card. 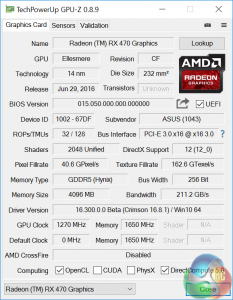 The ASUS card has two overclocked modes available – ‘Gaming mode' which runs at 1250mhz and ‘OC mode' running at 1270mhz. We have tested graphics cards from all manufacturers in recent months at their fastest supported speeds, just to keep things on an even footing. I believe that KitGuru readers will use these OC modes available via the supplied software anyway.

Both RX 470 and RX 480 are built around a 256 bit memory interface and while we are reviewing a 4GB RX 470 the subject of memory count doesn't quite end there.

Time for a little preamble now…

The week before this review went live was certainly interesting behind the scenes, especially in regards to our conversations with a handful of etailers and AMD themselves. It would appear that AMD will be releasing 4GB and 8GB versions of the RX 470 even though its not ‘official' news yet. Price points for the high grade customised 4GB RX 470 cards just before launch are said to be around the £190 mark.

AMD seem to have their pricing strategy all wrong with these cards. Simply releasing a 4GB RX470 and an 8GB RX480 with a £50-£60 price difference between cards would have been more market savvy to me. It seems rather obvious that incorporating 8GB of GDDR5 memory into a RX470 seems somewhat pointless – the GPU will be long out of horsepower before it ever requires 8GB of texture memory.