Enermax are highly respected in the enthusiast community, especially for their high quality power supplies. Today we are looking at an update on their new Modu 82+ II 525W unit, which adds EU regulation ‘ErPLot6’ compliancy.

These new revisions are being rolled out in 2011 to meet the new guidelines and the 525W model will be available from March 2011 onwards for around £100 inc vat. This is an 80 Plus Bronze unit with a reported 84%-88% efficiency.

So why another revision? ErP (Energy-related product) is a new directive to establish a framework for the setting of eco-design requirements. All products must meet the ecology design requirements and obtain the ‘CE’ certification. Only then, can the product be sold into the EU market.

ErP Lot 6 (previously EuP = Energy-using Products) is part of the EU FrameWork Directive on Eco-Design of Energy Using Products from the 21st of October 2009. A new regulation (no 1275/2008) states that from the 7th of January 2010 a PC system should not consume more than 1W during off state or standby. From the 7th of January 2013 the limit will change to 0.5W. In the future, only systems which meet this requirement will receive CE certification.

To meet this requirement a PSU is only part of the equation, the motherboard also has to be compliant, ultimately reducing power consumption and meeting the ErP Lot 6 demands. In the case of a power supply, the standby consumption depends on the efficiency of the 5V standby rail (5Vsb).

Enermax say “We improved the efficiency of the 5V standby rail to make its PSU ready for the newest EU standard. We gained around 20% efficiency on the 5Vsb rail – up to 55% instead of around 35% (0,09A load, 230V). The first models will be launched at the beginning of 2011 – series by series, starting with Pro82+ II and Modu82+ II. Enermax is one of the first PSU manufacturers to react on this regulation.” 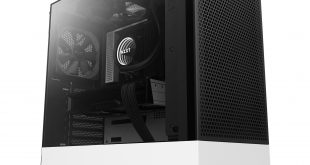 It’s a big day for NZXT, as the company has announcing a slew of new …