Mortal Shell has been on Nvidia's list of upcoming ray-tracing and DLSS supported titles for quite some time now. This week, the game's RTX update is officially dropping and Nvidia has a new Game Ready driver in preparation for it. Aside from that, we also have some new upgrades to Nvidia Reflex, Nvidia Broadcast and new G-Sync Compatible displays.

For those looking forward to Mortal Shell's RTX upgrade this week, here is the performance you can expect at maximum settings with various Nvidia RTX graphics cards: 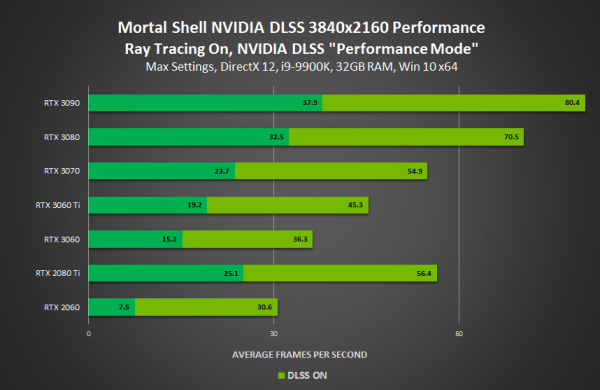 As for Nvidia Reflex, the feature is being enhanced for both Fortnite and Valorant. Both free to play games have supported Reflex for a while now, but this new update introduces Reflex Boost, which can further cut down on input latency. In the case of Fortnite, turning Reflex On + Boost brings latency down from 18ms to 15ms, while in Valorant the feature brings latency down from 20ms to 17ms.

Nvida Broadcast users will also benefit from this driver update, as it brings native integration of Nvidia Broadcast's background noise removal tool to OBS. Finally, a few more G-Sync Compatible displays have been added with this update – the LG 27GP950 and LG's 2021 B1, C1, G1 and Z1 series of 4K TVs and the MSI MAG 301 RF.

You can download the GeForce Game Ready 466.11 driver through the GeForce Experience app. Discuss on our Facebook page, HERE.

KitGuru Says: Do many of you play Mortal Shell, Valorant or Fortnite? What do you think of this week's driver enhancements?