Everyone loves a good triple monitor setup but they aren’t exactly easy to move around and for laptop gamers, it can be tough to go from multiple monitors at home to just one while on the road. However, Razer may have the answer to that as the company came to CES this year armed with Project Valerie, a new concept laptop which packs in three displays for a portable multi-monitor set up.

Project Valerie is a thicker version of the 2016 Razer Blade Pro but that extra thickness is put to good use by adding on two additional 17.3 4K IZGO displays, which swing out to the sides of the main display, giving you a perfect surround setup with a monstrous resolution of 11,520×2160. These displays all feature G-Sync and are powered by Nvidia’s GTX 1080. 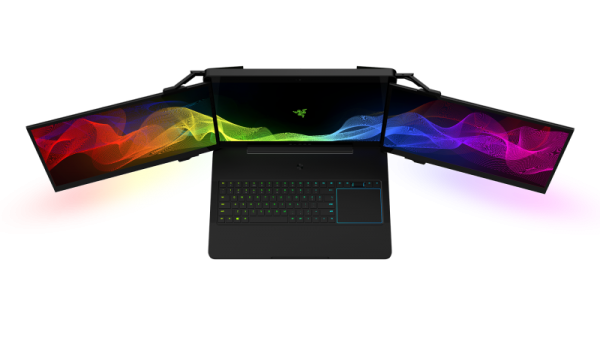 The additional displays deploy automatically and align themselves perfectly with the bezels on the main display, so you won’t have to worry about lining them up perfectly each time. In Project Valerie’s announcement, Razer CEO Min-Liang Tan explained the idea behind this concept: “Multi-monitor desktop set-ups are becoming more necessary for professionals, creators, and gamers. Project Valerie promises all of the functionality of three screens and none of the hassle.”

Obviously, this kind of product would end up being very expensive. It could also be quite some time before it hits the market, if it does at all. Razer always comes to CES armed with cool concept designs but they don’t always make it to market, as we saw with Project Christine in 2014, or the Razer Switchblade in 2011.

KitGuru Says: As far as concepts go, I actually really like this idea. However, I can also see it costing upwards of £5000, which would push it way out of most people’s price range. What do you guys think of Project Valerie? Would you like to see something like this hit the market?