Computex 2015 has officially kicked off and our man on the ground, Leo Waldock, has been roaming the show floor and hitting the press conferences in search of the most exciting announcements. Today, Corsair has revealed the Bulldog, a DIY mini-PC built for 4K gaming in the living room. 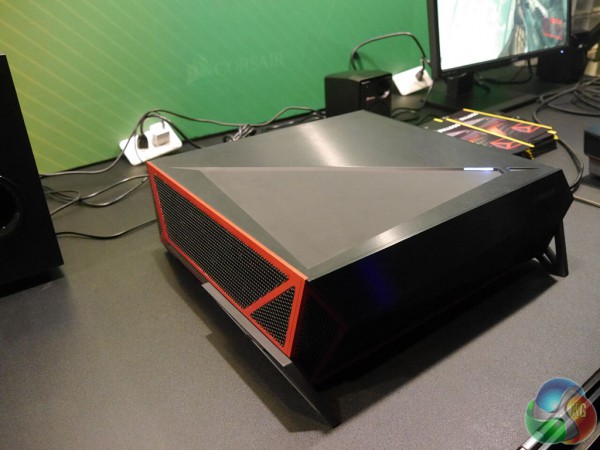 The Bulldog is currently a prototype, aimed at gamers who want to play 4K games in their living room on a nice big 4K TV. As you would expect, this requires some serious power in a relatively compact space. Everything would have to be fairly quiet as well. Corsair isn’t offering an entire pre-built system here but rather, a DIY kit, consisting of the ITX chassis, CPU liquid cooler and an SFX 600W power supply. 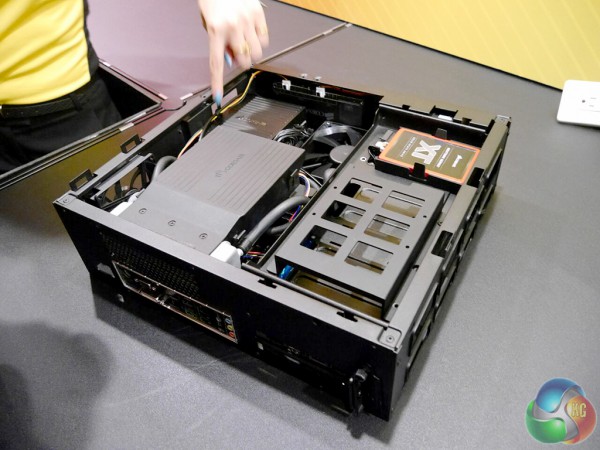 The test systems at Computex did have a GPU installed, with a Corsair mounting plate and H55 cooler keeping the temperatures down. Corsair is currently working with vendors such as Nvidia and MSI in order to get liquid cooled graphics cards on to the market in the near future. If you already own a GPU, then the Corsair H55 liquid cooler with GPU mounting bracket will cost $99.

The Bulldog will be priced at $399 and the same in Euros. UK pricing has not yet been confirmed so feel free to place your bets. According to Leo, the system was used to demo gameplay of The Witcher 3 and it ran impressively. However, the second part of the demo, which was supposed to showcase Grand Theft Auto V, ended up failing due to a fault with the TV.

Corsair did make it known that you could install Steam OS on to this system if you wanted to, rather than Windows. However, it seems that Valve’s focus on taking over the living room has come to a halt over the past 12 months, so this likely won’t end up being a popular option.

KitGuru Says: It looks like Corsair is making a push for the living room gaming market. In my own opinion, the barebones kit looks pretty good and 4K gaming just got a little more affordable thanks to the launch of the GTX 980Ti. What do you guys think of the Corsair Bulldog? Are any of you looking to build a small PC for living room gaming?

Once again, thanks to Leo Waldock for providing us with this information, straight from Computex 2015.