If you’re heading to EGX, Eurogamer’s gaming expo, this weekend, with plans to check out some of the biggest game launches over the next few months, you’ll have plenty to choose from. Middle Earth: Shadow of Mordor is there, as is Battlefield Hardline, Far Cry 4, Batman: Arkham Knight, Alien Isolation, Evolve, Witcher III: Wild Hunt, Nosgoth, Smash Bros Wii U, Call of Duty Advanced Warfare; the list goes on and on. Unfortunately though, so do the queues. 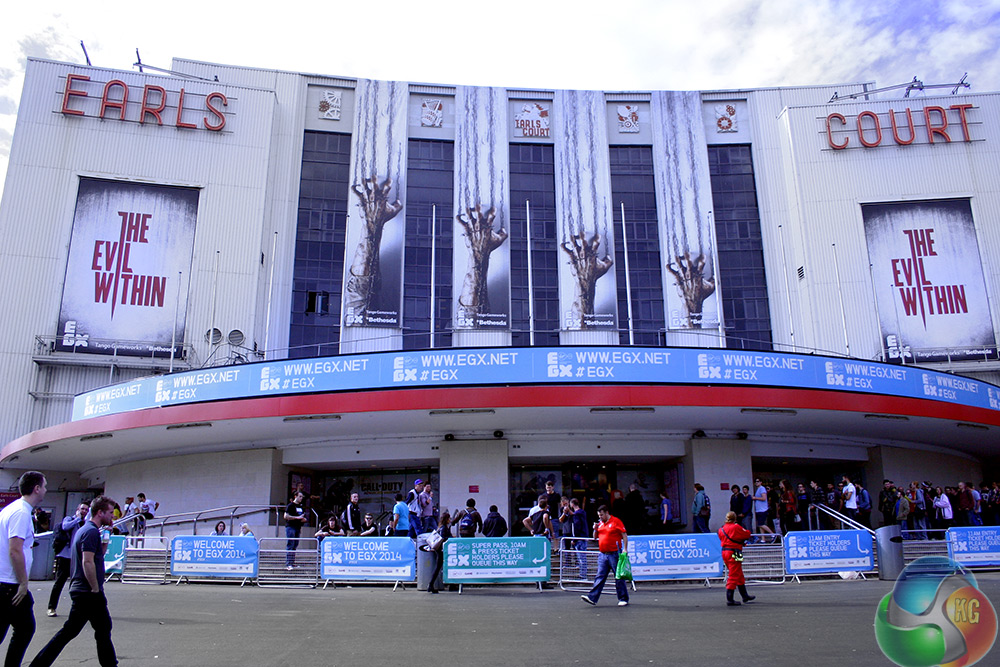 Indeed, even yesterday, the first day of the show where due to it being a week day, there were likely less people than there will be this weekend, the queues were rammed. Some more than others, but the majority of the AAA titles there yesterday were forcing 45 minute or more waits on those wishing to give the games a try. 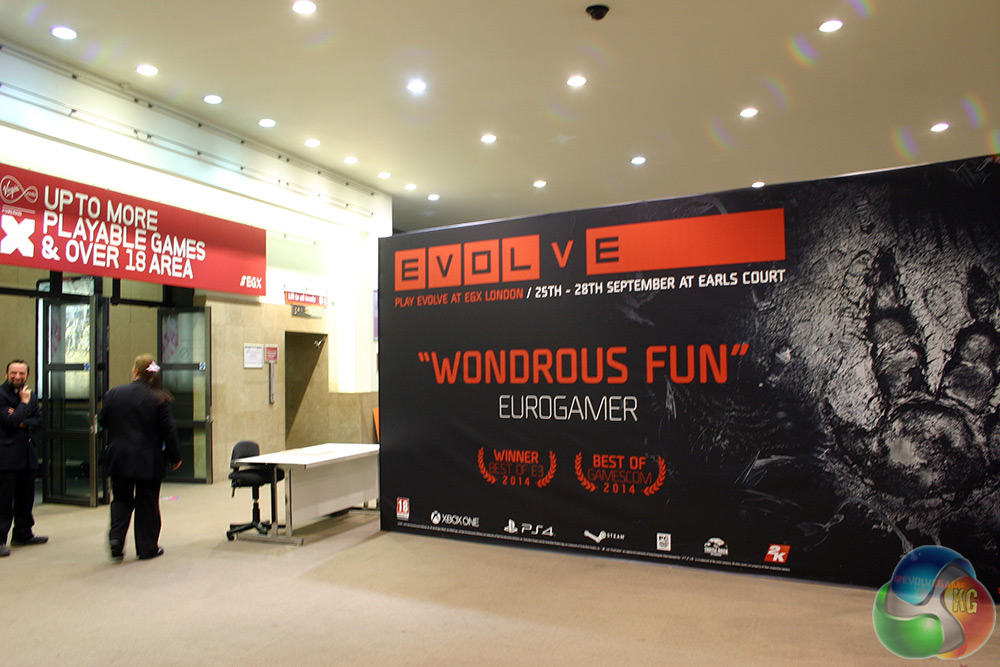 Don’t be fooled by the curiously empty lobby, you’re about to do a lot of standing and waiting 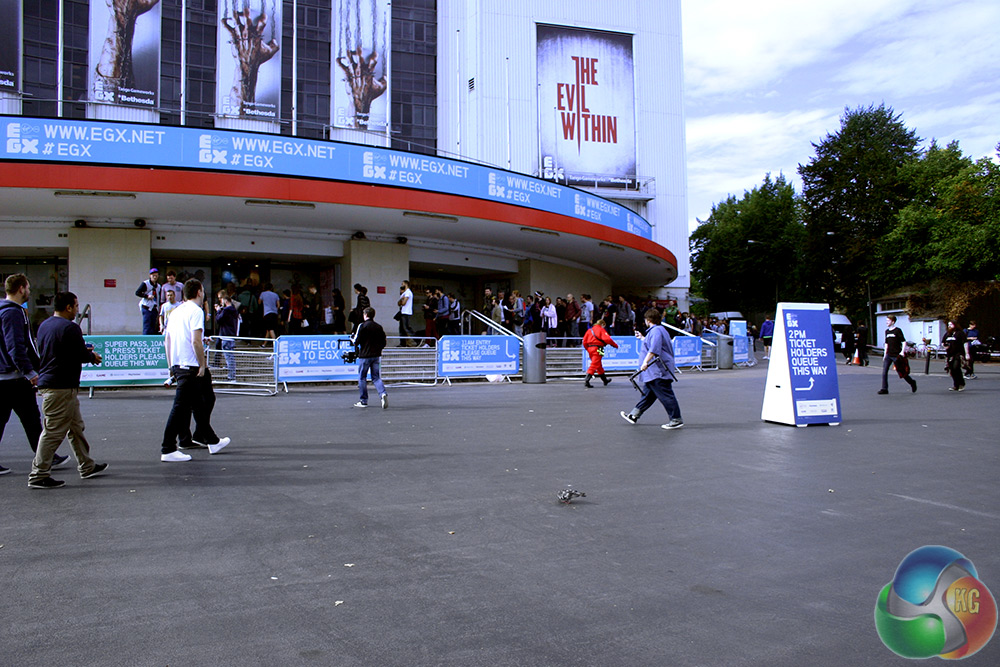 The first queue you’ll see when you go is the one to get in. It was moving faster than the ones inside understandably, but it was still the longest of the bunch.

If you are going to spend a chunk of time in queues this weekend, the staff at some booths do at least put up notices of how long you can expect to wait. If not, ask some of the attending PR guys, they can normally give you an estimation. 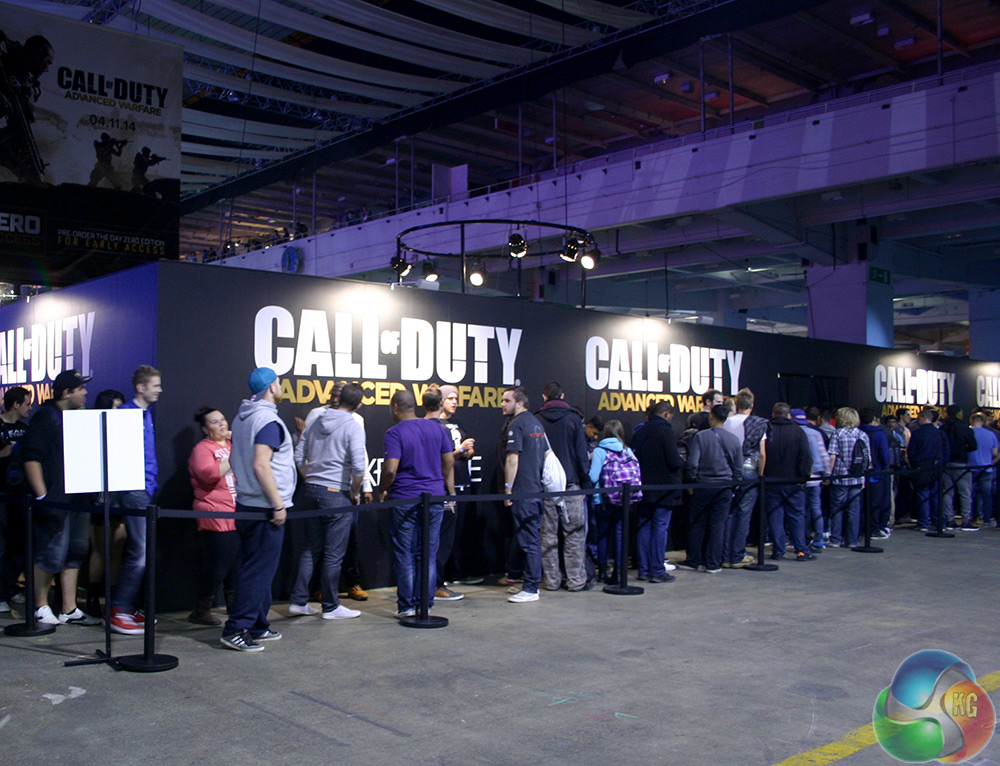 Some of the queue systems, especially in the 18+ area, ran into one another so it was often hard to figure out where you’d even need to stand to get in line. 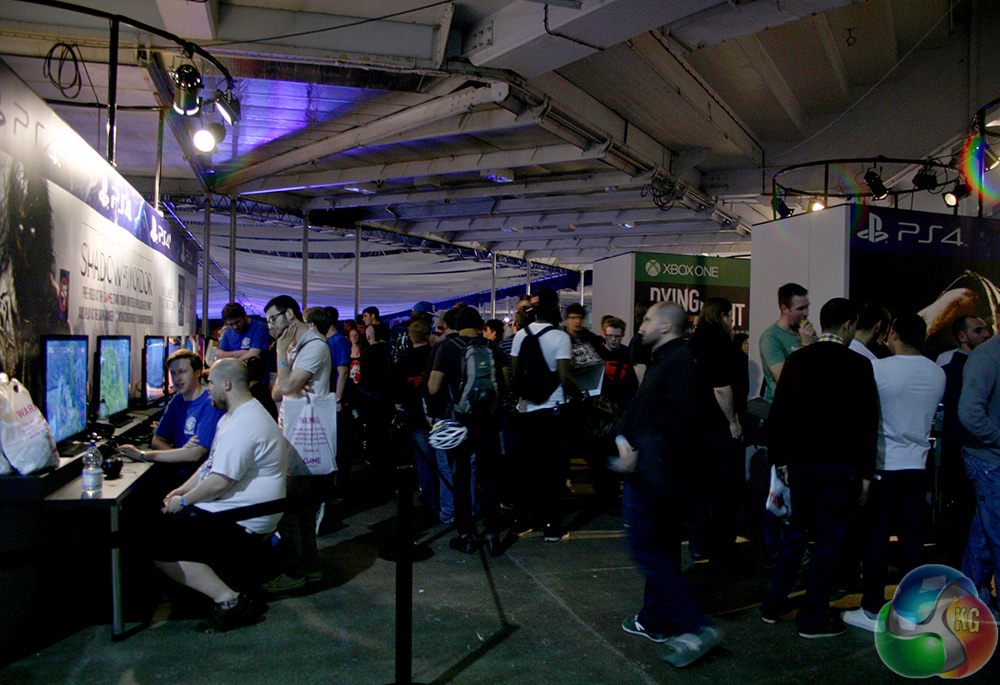 This one was a mix of Shadow of Mordor, The Crew and Battlefield Hardline 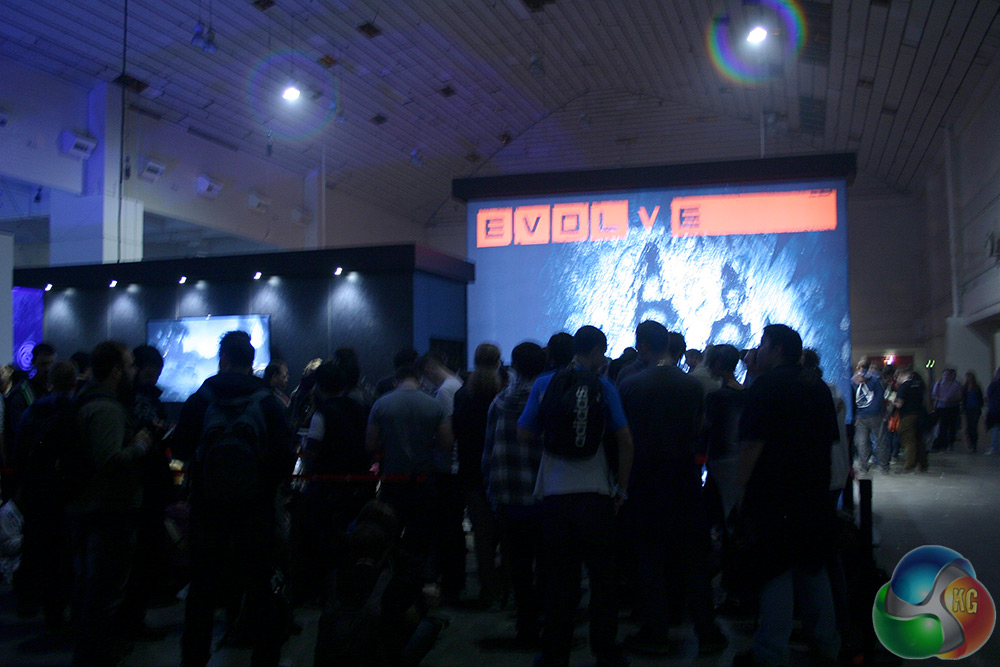 Some of the problems were to do with the games being shown off simply not having enough systems. Evolve’s booth is the same 20 machine set up that was used at much smaller events like Multiplay’s i52. It’s just not enough. 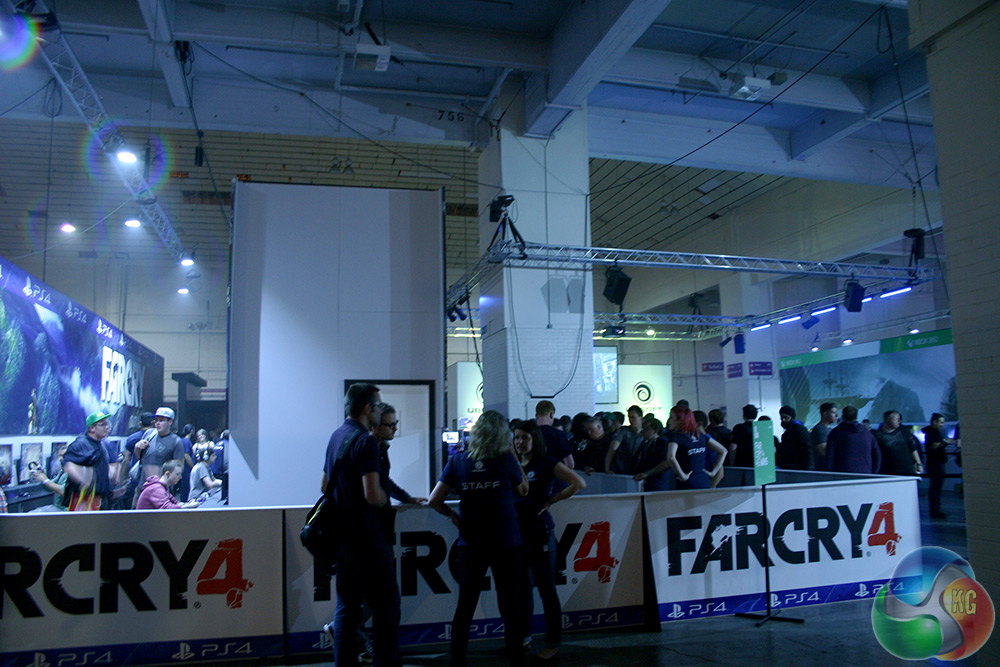 However even much more expansive booths like the ones for Far Cry 4 and Alien Isolation still had pretty long waiting times (though the latter was the shortest of the bunch at about 30 minutes). 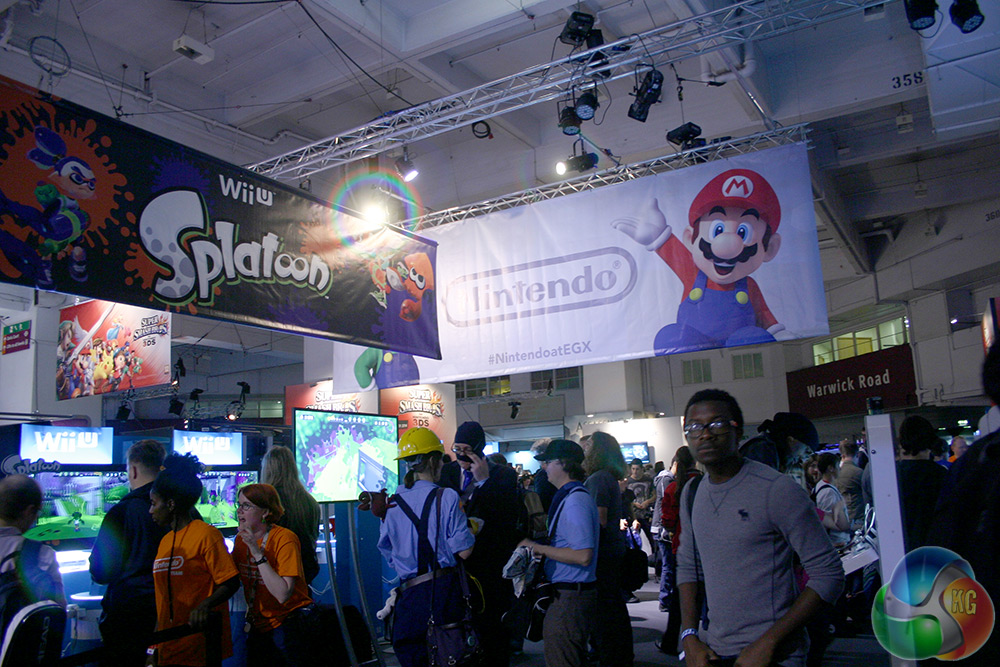 The Nintendo area on the ground floor was actually one of the less busy areas, but if you want a game of Smash Bros you’re still going to need to hang around for a while. 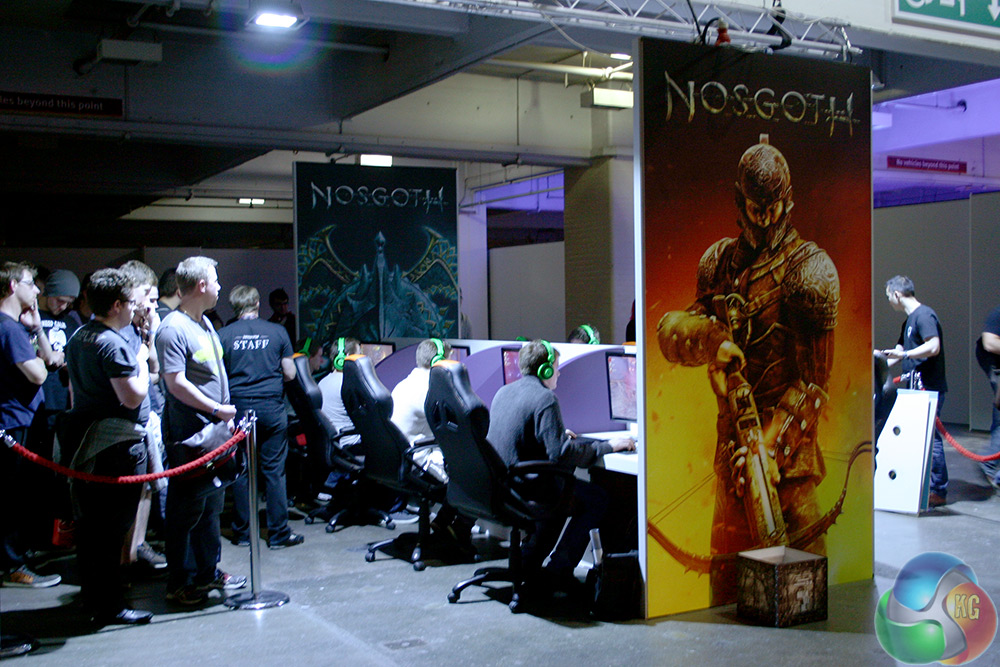 Nosgoth might have been around the festival scene for a while now, but it still drew some lengthy queues 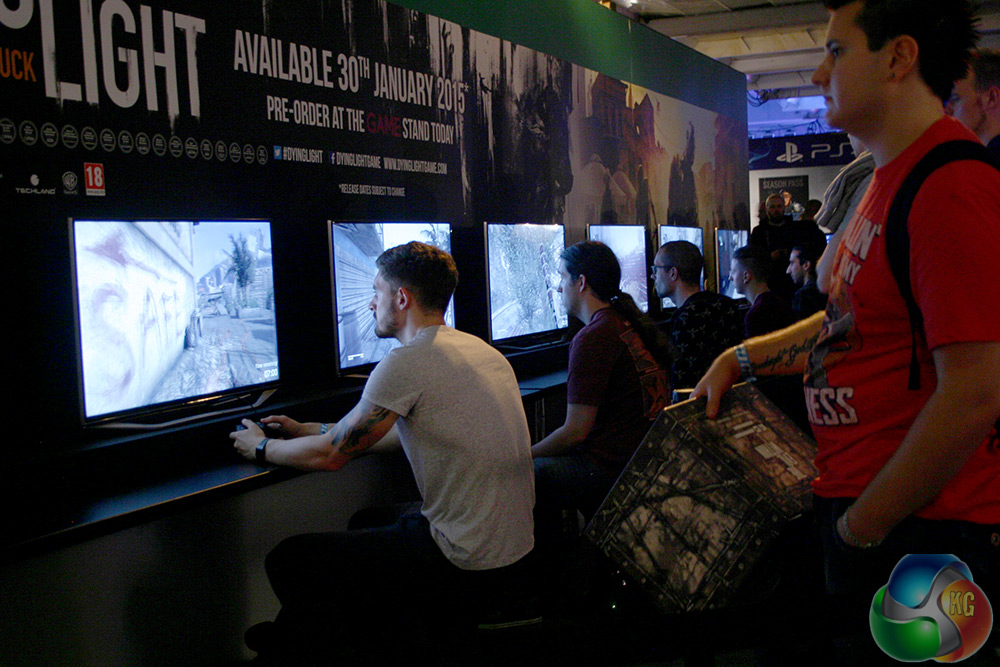 One saving grace for some for some games, like Dying Light and Battlefield Hardline, although you have to queue to have a go at them, you can at least watch other players while you wait. Other booths are hidden away behind giant promo screens that do add to the mystique of some titles, but also make it dull as ditch water when you’re waiting.

Other notable (but unpictured) games with large queues with 45 minutes plus wait times (some as long as two hours) included Witcher III, Assassin’s Creed Unity, The Evil Within, Mortal Kombat 7 and the Crew.

All of this aside, I don’t want to bum out those going to EGX or those thinking about purchasing tickets for next time, as there’s still so much to do and see at the show, you just need to decide what you want to do: spend the majority of your time queuing in order to play some of the bigger titles out there, or instead try out some of the new indie games on show, of which there are a lot and many of them are fantastic.

And the best part is you don’t need to wait to play them (comparatively).

KitGuru Says: It almost feels like these shows are too big for queue systems now. Maybe someone should consider running some sort of appointment sign up system so you can book your spot and come back later. Either that or the mandatory requirement for each AAA game being shown should be 50+ machines. I’m not sure how else to get through the multitudes that want to give these games a try.