Acer first debuted the concept of its 2-in-1 Predator Triton 900 laptop back at IFA 2018, able to flip and manoeuvre the display thanks to the unusually designed hinge. Initially keeping hush about what was under the hood, Acer has finally divulged what consumers can expect from the convertible notebook’s $4,000 price tag.

The Acer Predator Triton 900 sports a 17-inch 4K IPS display with touchscreen functionality and Nvidia G-Synch technology to prevent its variable refresh rate from tearing. This is held by two CNC-machined joints, dubbed the “Ezel Aero Hinge,” which offers four different positions for the display to rest. 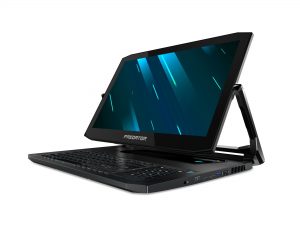 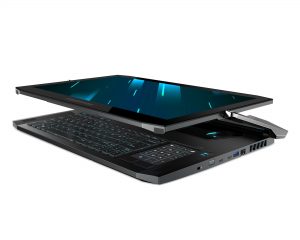 First up is the standard mode, ensuring that the Acer gaming laptop behaves as you’d expect any notebook to. Following that is a convenient tablet mode, transforming the device into what is perhaps the world’s most powerful Windows tablet, as well as the thickest. “Ezel mode” brings the display forward at an angle, perfect for gaming, while the final display mode flips the screen to share with others.

The unit itself looks to be quite chunky, but this is the trade-off for housing a range of impressively powerful hardware. Intel’s 8th-generation Core i7 processor leads the charge with six cores, paired with 16GB of RAM and a 1TB SSD by default, however these should be customisable upon purchase. The Acer Predator Triton 900 is one of the first Nvidia RTX-powered laptops, helping the display to shine with an RTX 2080. To prevent these components from overheating in the confined space, Acer has endowed the device with its proprietary “AeroBlade” metal fans and “Coolboost” technology. 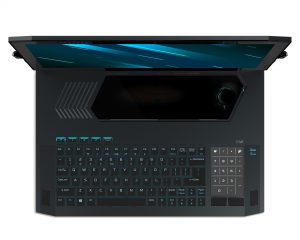 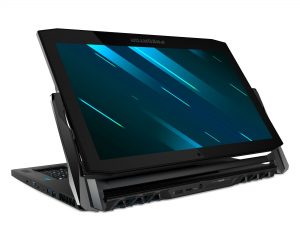 While there’s no word on an international release for the Predator Triton 900, North American residents will be able to bag themselves Acer’s state-of-the-art device come March for a whopping $3,999. Fortunately, the company realises that this isn’t a small asking price, also offering 15.6-inch Predator Triton 500 without the Ezel Aero Hinge starting at $1,799 / €1,999 for an RTX 2060, bumping up to $2,499 for an RTX 2080 beginning February.

KitGuru Says: Without a hands-on with the notebook, it’s difficult to tell whether the functionality proves useful or is just a gimmick. I can think of various uses for the different modes, though, including graphic design with the tablet and “Ezel mode,” as well as party games for the display mode. What do you think of the new Predator Trition entries?

Previous CES 2019: HP to launch the first Nvidia BFGD in February, complete with built-in Nvidia Shield
Next CES 2019: Corsair One upgrades to Core i9 and RTX 2080Ti