Although fully automated cars aren’t expected to hit our roads until sometime in the 2020s, we’re well on our way with a combination of features and safety measures that are now available to Tesla drivers as part of its ‘autopilot’ scheme. The update was rolled out to Tesla Model S and X vehicles, making them capable of automatically keeping the car aligned with the road, changing lanes if needed and adjusting speed in response to changes in the traffic. Founder of the company, Elon Musk however, did advise caution. 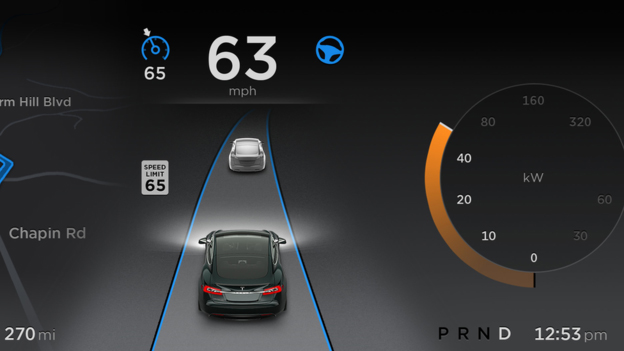 The vehicle’s sensors keep track of speeds, positions of other cars and the lane itself

He’s not worried that the system will rise up and take over the world like his other machine fears, but he’s not entirely certain that the autonomous vehicles won’t hit something.

“It should not hit pedestrians, hopefully. It should handle them well,” he said during a press event for the new update (via BBC).

He went on to add that we aren’t at a stage where the manufacturer is held liable for any problems with the vehicle. As the designated ‘driver,’ the person behind the wheel is still 100 per cent responsible for what happens while that vehicle is in motion. That means that even if you had the car in autonomous mode, if it hits something, it’s your fault.

So far so good though, as early tests appearing online have shown people in awe of their cars’ new ability to drive themselves around. It looks like a somewhat nerve racking experience, especially while you get used to the idea of not being in control, but the potential for improved safety with a system like this is huge. It would also serve – after more testing – as a great method for getting people home from bars after they’ve had a few.

If this did nothing else but end drunk-driving, it would be a victory, but there’s also huge potential for these sorts of autonomous vehicles for people with physically debilitating conditions, or injuries and then for everyone else when they’d rather have a nap on the way to work, read a book or watch a film on that giant TV that the Tesla Model S has in its dash.

KitGuru Says: Do you think you would have the confidence to turn on autopilot in your car and trust it to do the right thing?