The time has come, after years of rumours and speculation Star Wars: The Force Awakens is releasing this week but obviously, not everyone can see it the day it comes out. For those who are wary of spoilers, a Google Chrome browser extension has been released to help block pages with spoilers on them.

The extension is called ‘Star Wars Spoiler Blocker’ and as its name suggests, it stops you from entering pages with Star Wars spoilers. If you go to a site with spoilers, a box will pop up warning of potential spoilers, from there you will have the option to proceed anyway, or just close the tab. 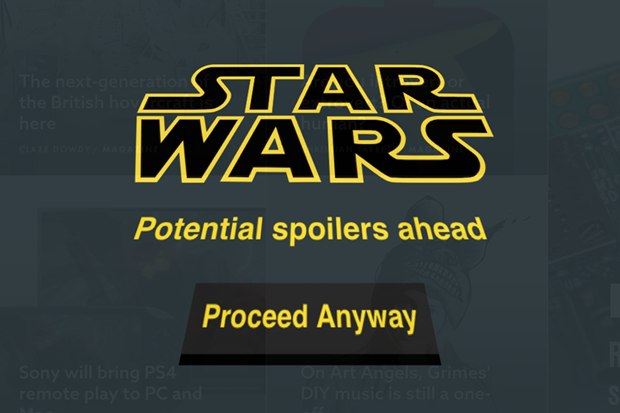 The extension is created by Jitbit, a small tech company. The icon that this extension will add to your taskbar is a little image of a storm trooper and can be switched on and off whenever you want. This is a well timed launch given that Episode VII has premièred and is opening to the general public tonight at midnight here in the UK.

KitGuru Says: The extension might be a bit hit and miss with what it blocks so if you’re spoiler concious, give it a go and let us know how you get on. Are any of you going to see the new Star Wars this week?