Microsoft is launching an 84-inch Surface

Microsoft is officially launching the Surface Hub, a giant 84-inch all-in-one system that will sell primarily to businesses. As you would probably think, these devices don’t come cheap, with the 84-inch model going for as high as $20,000.

There will be a slightly smaller 55-inch model available as well, which will sell for just shy of $7000. These huge Surface devices were originally announced back in January, with orders set to go live on the 1st of July. According to Microsoft’s announcement, the company has been working on these all-in-one surfaces for around three years, designing it for productivity. 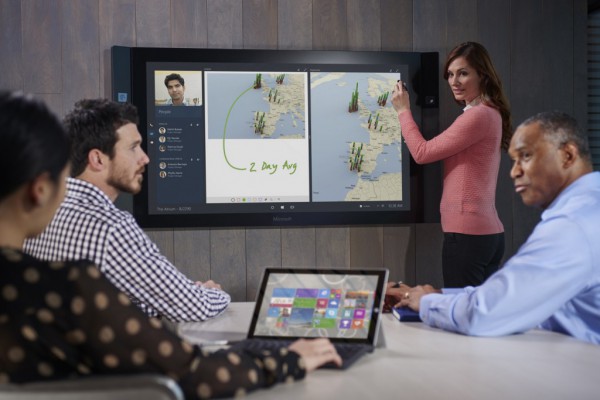 “Today marks a milestone on the journey. With the announcement that we’ll begin taking orders for Surface Hub on 1 July, we are one step closer to bringing a new way of working to our business customers and delivering a tool that will bring teams together in more efficient and engaging ways.”

The Surface Hub will be available in 24 countries, including the US and UK. However, non-US pricing has yet to be revealed. Microsoft seems to be mainly pushing this for meeting room use or collaborative work. Each Surface Hub will come with Skype for Business as well, which may even have its real-time translator implemented by the time these ship, which will make international conference calls a little easier.

KitGuru Says: Details on exactly what is inside powering the Surface Hub are thin but either way, they look really nice. Pretty expensive though.