Microsoft now allows customers to add funds to their accounts using Bitcoin, the new payment option was quietly added this week and quickly spotted on Reddit. Microsoft account funds can be used to purchase games, apps, music, movies and TV shows on both the Xbox consoles and Windows devices.

Bitcoin rose to popularity last year and while it is still successful today, a lot of the drama surrounding digital currencies seems to have died down. Microsoft is the most recent retailer to start accepting Bitcoin as a payment method but it is also the first major platform holder to do so. 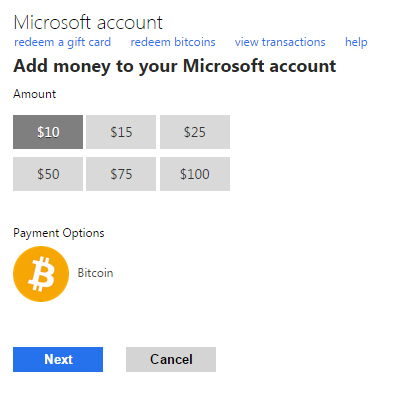 Right now using Bitcoin as a payment method is only available in the US, Microsoft has yet to confirm if the option will come to other countries like the UK.

Users have to buy funds in $10, $15, $25, $50, $75 and $100 increments, there is no option to set a custom amount. It also doesn't appear to tell you what the conversion rate is either. We will update this story if Microsoft comments on Bitcoin payments in other countries.

KitGuru Says: This will be good news to those who still mine or have some Bitcoin left over. Have any of you guys delved in to digital currency? Would you like to see more retailers start to accept Bitcoin?