MSI showcases its 2014 line up at CES

This year’s Consumer Electronics Show kicked off today and it looks like the folks over at MSI are off to a flying start as they have begun showcasing the company’s 2014 line up of high performance Gaming Laptops, Workstations, All-in-Ones, Tablets and PC components.

MSI is aiming for a couple of innovation awards at CES this year too, its nominee’s include the the GS70 notebook, which also happens to be the world’s lightest and thinnest 17 Inch gaming laptop and the AG2712A All-In-One Gaming PC which utilises the company’s exclusive Anti-Flicker technology and Blue Light Control display to help reduce eye strain during long sessions by eliminating screen flicker which is usually invisible to the eye. This AIO PC will need to pack some serious cooling too as it features an AMD R9 M290X graphics core. 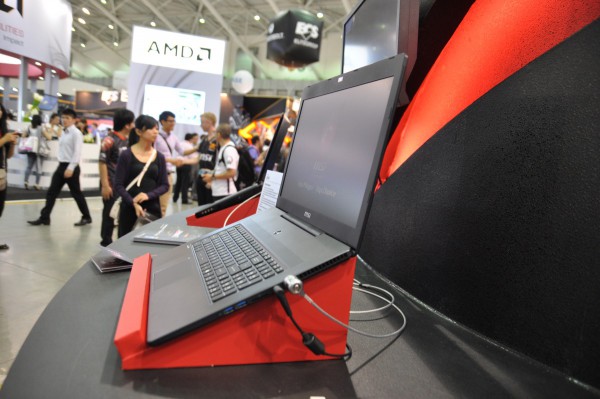 MSI’s Vice President of American sales, Andy Tung, had a few words to say about the products on show: “MSI’s 2014 lineup of notebooks, tablets and AIOs embodies our commitment to delivering exceptional performance, constant innovation and magnificent style, from the world’s thinnest gaming notebook to the first gaming AIO and powerful workstations, 2014 will be a year filled with outstanding products.”

It’s not all about notebooks and all in one PC’s though, there will be a couple of components to show off too. First up is the MSI R9 290X Lightning edition, which could well and truly end up being the fastest 290X available much like the GTX 780 Lightning. The next one is something that some AMD system builders will get excited about, MSI is bringing it’s ‘Gaming’ line of motherboards out for AMD sockets and will be showing them off at CES this week.

KitGuru Says: CES is a pretty exciting time for us, it sets the stage for what cool things we can expect to release throughout the rest of the year. Last year, 4K was the big thing, what do you guys think will be the focus of CES this year?