Nvidia Corp. on Monday introduced two Tegra K1 system-on-chips (code-named Logan) for mobile devices that feature the company’s Kepler graphics architecture as well as 32-bit or 64-bit general-purpose processing engines. As expected, the new chips not only improve graphics performance of mobile gadgets like smartphones and tablets, but also bring GPU compute capabilities to such kind of devices. 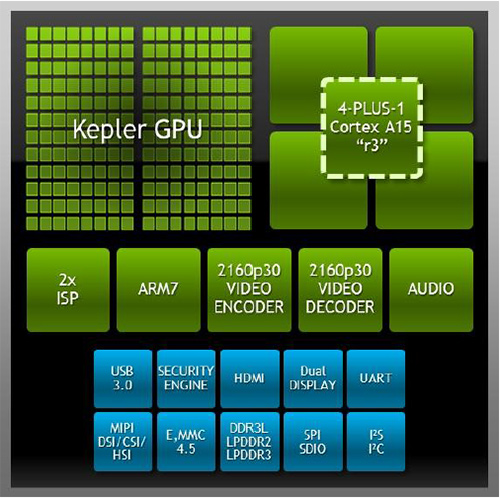 The 64-bit version of Tegra K1 is projected to be significantly more powerful compared to 32-bit version thanks to Denver’s 7-way superscalar design, up to 2.50GHz clock-rate and 128KB+64K L1 cache. To take advantage of Tegra K1 64-bit processor, applications will have to use 64-bit compute technology and in many cases have to be re-designed. To look better on Tegra K1-based devices, video games also should support tessellation and other technologies featured by the chips. 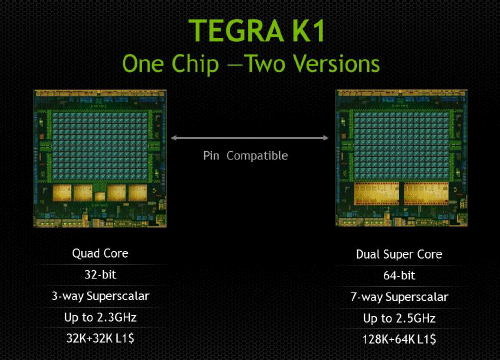 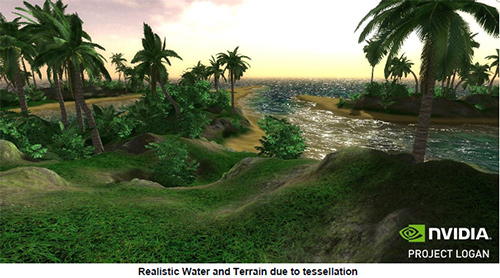 “With the introduction of this revolutionary processor, we can take applications that run on PC or console and run it on Tegra. From here onward, I think we’re going to see the performance and feature gap between mobile and PC high-end gaming continue to narrow to the point where the difference between the platforms really blurs,” said Tim Sweeney, founder of Epic Games and developer of Unreal Engine.

Nvidia’s Tegra K1 chip will not only power new generation mobile devices like smartphones, tablets and game consoles, but will also be used in various infotainment systems for cars. Thanks to support for up to 4K (3840*2160 resolution) video output, the SoCs can be used inside TV-sets and other types of consumer electronics as well.

“Kepler powers all 10 of the world’s most energy-efficient supercomputers. By scaling this technology down, NVIDIA has set the new standard for what’s possible in mobile devices,” said Linley Gwennap of the Linley Group.