Overclockers UK is turning 20 years old this month and there is quite the celebration planned to mark the occasion. Not only will there be two big events, one involving an in-store party, but there will also be a special sale and giveaways!

The in-store event is going to be particularly fun for those able to make the journey on the 29th of February. Those attending can expect food, drinks, raffles, goodie bags, deals you won't find anywhere else and some good gaming-related fun to take part in. Those interested can head over to the landing page for full details on dates, times and the address to get there- there is also a Facebook event set up so you can let everyone know you'll be there. 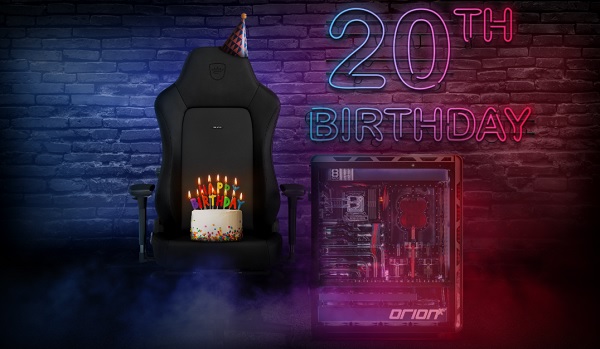 Those who can't make it can still take part in the festivities through OCUK's online sale, which will begin on the 27th of February. As for what kind of deals you can expect, you'll be finding big discounts on gaming monitors, GPUs, gaming chairs, cases, SSDs, peripherals and more.

If you head over to the Overclockers UK forum, you will find a few planned deals being announced early, including the LG 38GL950, a 38-inch 3840×1600 ultrawide gaming monitor with a Nano IPS panel and 144Hz refresh rate with £250 knocked off the price tag. The Lian-Li O11 Dynamic (ROG Edition) will be going for less than £100, as will a few popular Phanteks cases. This is just a taste of what is planned though, so keep an eye on the forum for more early news on upcoming deals.

KitGuru Says: We'll be looking forward to learning more about OCUK's 20th birthday plans over the next week. Are any of you thinking about going to the in-store event on the 29th?

Previous PlayStation is challenging its fans to earn 2.7 million trophies
Next Apple reportedly set to launch a new iPhone during March event