Back in December, we ran a slew of giveaways for the holiday season. There was just one catch- we wanted the winners to come back and share their thoughts with us on what they won. We’ve been pleased by the number of reviews we’ve received back so far and today, we are sharing another one.

Adam Barnes won a Cooler Master H500P chassis from us. Here is his review:

On arrival, it was soon Obvious that this was not a small case and on that note not light either, weighing in at 14KG she really is a monster case.

The box was laid out very well showing off the RGB capabilities of the Front fans, along with dimensions and spec of the case. On opening the main Box you are greeted with a very nicely designed small box containing the screws, manual and spare parts for the fitment of your PC components.

Also, I noticed two large grey handles which were part of a large material bag, This soon became apparent that they were to help you lift the case out of the box! Genius idea! 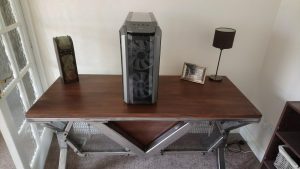 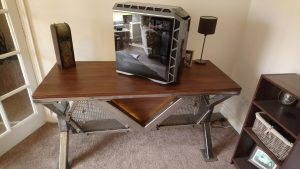 The case is a fantastic looking piece with 2 large 200mm RGB fans in the front and one smaller one at the back which is not RGB, The window on the side of the case is made from smoked tempered glass which I wasn’t expecting as most cases I have had where made of a cheaper plastic substitute.

The opposite side panel is made very well as you would expect with a cooler master case, made from quite a thick grade of sheet steel it doesn’t flop around and is very sturdy, but what pleased me most was the thumb bolts that hold the side panel to the case, as they are attached to the panel so they can’t be lost. 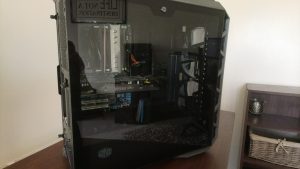 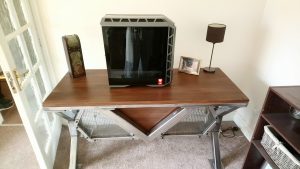 Building the PC up For my son was a pleasure and he helped me out to do so and I think he enjoyed the experience as much as I did, the inner panels where very well made, the motherboard markers where easy to follow, There were plenty of split rubber grommets to push wires through and allow room for water cooling pipes etc.

The hard drive installation was effortless with the clip on and slide in system that cooler master has designed.

All in all, this is a fantastic case that looks good before and after build, the quality of the case is superb along with the little things that helped like the carry handles to remove the case from the box.

The only downsides that we noticed are the RGB fan lights will only work with a cooler master RGB controller or a motherboard that is capable of doing so (my son’s board does not have this option so we cant have the lights on so that was a big disappointment for him).

We also assumed that with the case coming with pictures of graphics cards on display that there would be a riser cable supplied, but there again this is not the case (to my son’s disappointment again)

We would give the case a strong 8/10, the only reason it’s not a 10/10 is for the fact the extras that will need to be bought to get the PC how my son wants it to look. I did purchase a Cooler Master RGB controller and some additional fans for the case, which really helped the build ‘pop’ a bit more.

KitGuru Says: Thanks to Adam for sharing his review with us! We hope to have a few more to share over the next few weeks.