Baboom music on how it plans to disrupt and reinvent industry

Kim Dotcom might be most well known for his file lockers, Megaupload and Mega, but he's also put a lot of time and resources into developing Baboom, a music sharing and sales platform for the new generation. In a new video, Baboom's head of content and platform, Mikee Tucker has been talking about how Baboom plans to disrupt and reinvent the industry to put the power of distribution, sale and promotion, back in the hands of the artists.

Many of these aims will come about in the simple page layout design of Baboom. Combining social networking, sales and music streaming in one convenient fan page, Baboom makes the process incredibly easy. Artists can provide music for free with advertising, as well as making songs available for purchase and download. There's also links to their other content, a live twitter stream and competition options to help artists engage directly with fans around their music, rather than just their opinions or pictures like other sites. 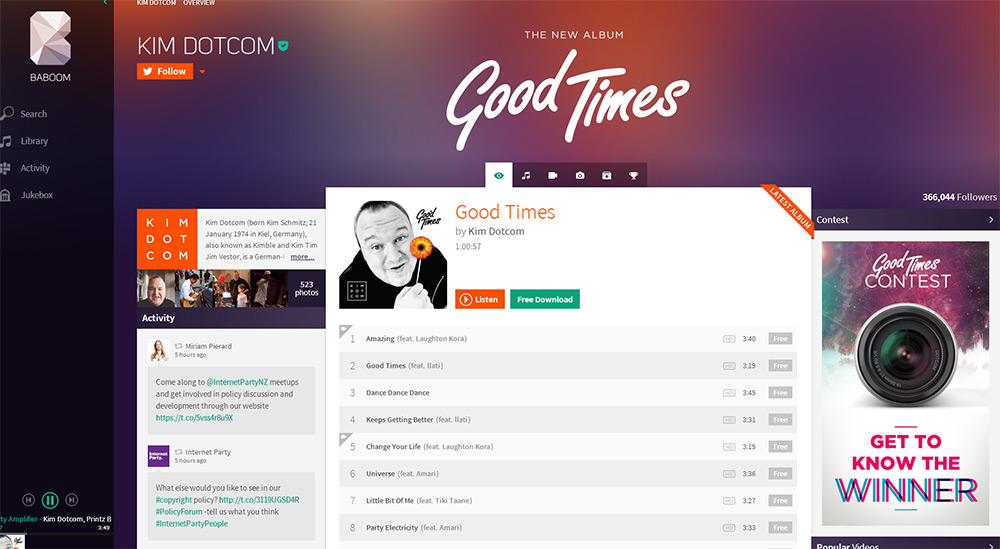 While Baboom still has yet to launch, a demo version of the site was put up when Dotcom launched his latest album, Good Times, showing how it can be streamed, downloaded, viewed in HD (in the case of music videos) all through a single page.

KitGuru Says: Considering I'm a bit of a stickler for just listening to compilation mixes on Youtube, or just finding long playlists on Soundcloud, I'm quite interested to see what Dotcom can do with this. It may end up just like the new MySpace though which tried to do something similar: essentially forgotten.