Valve’s Steam Summer Sale tactics are bad for all gamers

If there’s one thing PC gamers hate, it’s those horrible, by-the-numbers, mobile gaming mechanics championed by the likes of King and Zynga. The micro-transactions, pay to win scenarios, games that become more about some meta-management, rather than actually playing the game itself.

Scores of companies have been smashed for this, on forums and reviews, in every marketplace and on every digital distribution platform. One company though that always, always skates, is Valve. Whether it’s because it holds the key to the almighty Steam, or because of nostalgia for the days of yore isn’t clear, but it shouldn’t.

Just look at the Steam Summer Sale. It’s gone from being a way to pick up some AAA titles on the cheap, to some obfuscated, meta game: there’s team based, competitive buying, trading cards, collectibles, unlockable game content and a daily lottery to win prizes.

None of this has anything to do with the games we’re buying to actually play.

We all railed against Ubisoft just a few days ago with its Assassin’s Creed Unity “Guillotine Spin to Win” and yet Valve is doing the exact same thing. It might be selling released games rather than a pre-orders, but the premise is the same: pay money for a game now, and maybe you’ll win something extra.

Of course its all optional. I’ve bought some games in the Steam Summer Sale and haven’t picked a team or crafted a collectible, despite my inventory notifications flashing to let me know something else unrelated to the game I just bought is going on.

But all of this contributes to the landscape of digital game buying that nobody foresaw: we all have more games than we’ll ever play. Personally, I have just over 100, but I know people with far more than that, some closer to 1,000. It’s wasted money. These are products that can’t be resold, can’t be traded or given away and likely won’t ever be played; they just languish there in your account.

Valve refuses to let people do anything with these dusty collections and yet continues to convince you that you need to buy more and even goes so far as to distract you by making the actual process of buying games a meta-game in itself.

It’s the same kind of faux-progression, dopamine-rewarding, addictive mechanics that are built into games like Candy Crush to make you part with your money. Sure you can collect all of the Sale cards just through voting or other community actions, but every time you buy a game it lets you know just how close you are to reaching the next monetary threshold. Tell me you wouldn’t be screaming bloody murder at the screen if a King logo appeared alongside that rather than Valve’s? 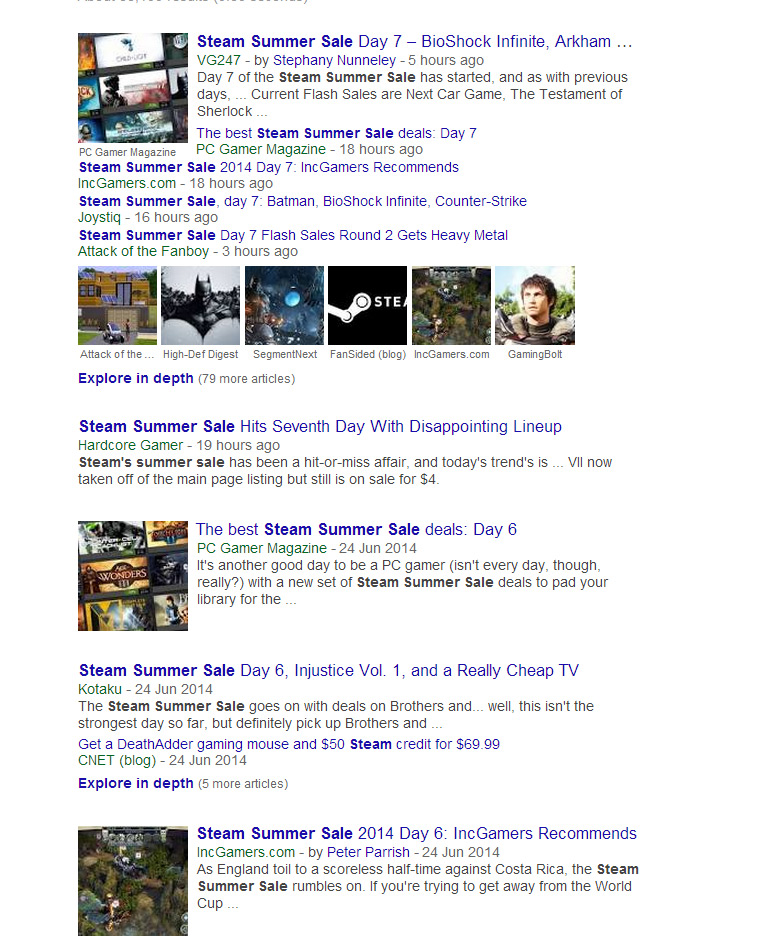 Valve doesn’t even have to promote it, we do it ourselves

The nudge to buy might be more gentle and subtle than many mobile developers, but what Valve is doing isn’t too far removed, and as successful as these Steam Sales are for developers, it’s contributing to games being underplayed and undervalued. It’s dangerous and alarming but for some reason Valve gets a pass.

Valve doesn’t do all of this meta-game nonsense for no reason. It and supporting developers make a little bit of money every time you trade a card or collectible and the sheer volume of transactions these team based Summer Sale mechanics encourage, makes them all a pretty penny.

While we can all get behind developers being paid for the work they do, it’s a worrisome trend that sees them focusing more and more on making money outside of the game itself. Their main focus should be crafting a game that sells because it’s engaging, fun and a unique experience, not bundling extra time-wasting, addiction pandering elements just to get you to spend a bit more to craft that Summer Sale ’14 badge.

We love to smash giant publishers like EA and Ubisoft for adding pre-order bonuses, or paid for DLC, citing them as the trend setters in a business that has picked up some of the worst aspects of the console and mobile market, but in reality, are the publishers really to blame? Are platforms like Steam, with its regular sales, collectibles, voting, awards, prizes and now competitive buying, the real problem?

KitGuru Says: As usual, we’d like to hear your thoughts on this. Get in touch with us below, or on the KitGuru Facebook page.