China’s first rover will rest forever on the moon

China recently made a big splash in the cosmos, when it sent its first rover to the surface of the moon. Yutu made it there and pootled about for a while, conducting basic experiments and generally leaving its made-in-china footprint on the surface of another solar body. However, mechanical problems were soon encountered and now it looks like Yutu cannot be recovered and will instead spend the rest of its many days, staring up at the great black, without much else to do.

Initially it was hoped that the problems could be corrected, but the timing was horrible. When they were detected, Yutu was entering its bi-weekly rest period – that’s necessary due the moon’s day/night cycle – which meant it was powered down for a fortnight after the problem, before any tweaks could be made. When it came back however, it became clear that Yutu was effectively stranded. 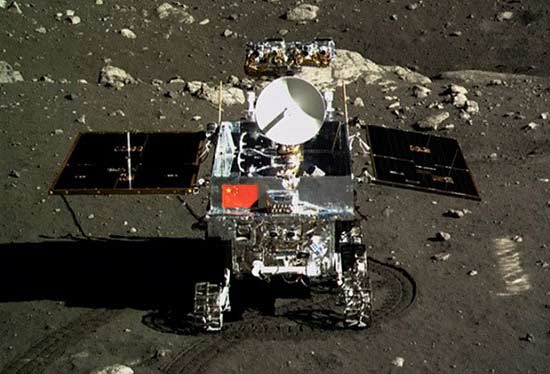 Chinese officials are placing the blame on the “coplicated lunar surface,” which the New Scientist is taking to mean the abrasive dust on the surface of the moon, which has previously damaged space suits and even caused overheating of rover parts. It could however, also be that the rover’s mast is unable to fold back in on itself, which is designed to protect internal components from the ultra-cold of sunless, vacuum temperatures.

Kitguru Says: RIP Yutu. You did a good job and will hopefully be the first in a new wave of space faring craft from different countries. The more that get involved in it, the hotter the competition is and the faster we’ll get some of the more exciting stuff done. Nothing gets space faring kick started more than a race.