Despite what many copyright lobbyists would have you believe, the media industry is continuing to do very well indeed, as despite a small drop in physical media sales last year, digital is booming and raking in billions of pounds.

The stats show physical goods sales dipping in music, video and games, (most notably video) though even that was only by a few per cent. Comparably in digital, there were nice boosts across the board, especially when it comes to games. Streaming though saw a big jump too, with it representing around 10 per cent of all music revenue in 2013.

As the BBC’s breakdown of that stats shows, overall the UK music, video and games scenes were worth a combined £5.4 billion in 2013. With streaming and digital expected to continue expansion this year, chances are that figure will be even higher by the close of 2014. 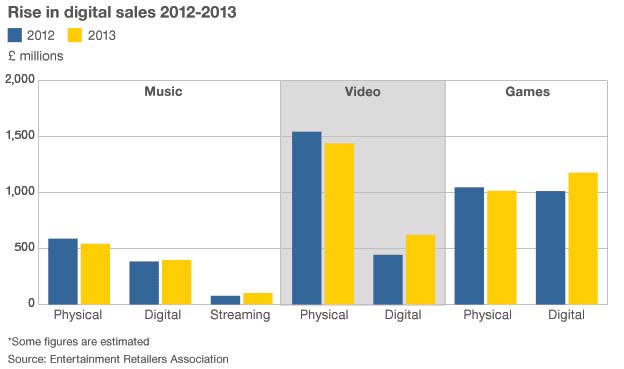 However more people will need to switch over from DVDs and Blu-Rays if streaming and digital is ever set to become the dominant media viewing format across all types. As it stands, more than half of all videos watched and music listened to still comes from physical media like CDs and Blu-Rays. That said, vinyl is making a bit of a come back, having increased its sales by more than twice as much in the past year, generating just over £14.5 million.

KitGuru Says: A drop in the bucket perhaps, but it shows that the physical formats, especially beloved ones like vinyl and perhaps digital cassettes in some instances, will remain for quite some time.

Previous Win STEAM game this week!
Next Devil’s Third is on track for release in 2014