Following on from Kim Dotcom’s “Moment of Truth,” event held earlier this week, where Edward Snowden, Julian Assange and Glen Greenwald, all accused New Zealand’s Prime Minister John Key of being complicit in his intelligence agency (GCSB) spying on New Zealand citizens, the PM has made a statement to the press denying their claims. He did however admit that there was likely to be some New Zealander data held in joint databases between the “Five Eyes,” countries, but said that it wouldn’t have been collected en masse.

Mr Key iterated that in New Zealand, if an intelligence agent wanted to view information on a citizen, whether already held or not, they would require a warrant first. This isn’t what we’ve been told by the likes of Mr Snowden, who explained recently that all he had to do to view data on countries within the Five Eyes group when he was working for the NSA, was to untick a single box. 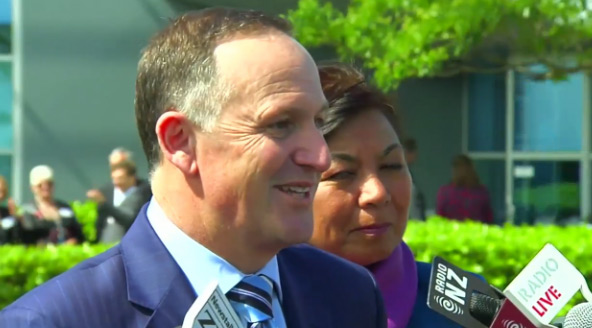 “We’ve always said there are other agencies around the world that either legally as a result of their own laws, or illegally will be out there potentially collecting information on New Zealanders,” he said. “…But what is absolutely also true is we can’t circumvent our law, so we don’t use a foreign agency to go and do something.”

Mr Key also quoted Inspector-General of Intelligence and Security Cheryl Gwyn, who claimed there was no mass surveillance going on, or rather, she hadn’t seen or heard of any.

As NZHerald reports, journalist and Edward Snowden document leaker, Glen Greewald disputes John Key’s lack of knowledge on the surveillance, citing slides he’d shown during the Moment of Truth conference. He also suggested that it wasn’t particularly surprising that the Inspector-General was being kept out of the loop. He said that there was, “a history around the world when we’ve done reporting of the people who are responsible for overseeing these agencies being kept in the dark… I don’t disbelieve her that she’s never seen it, but that just means she hasn’t seen the evidence.”

As part of the “Five Eyes,” countries, which sees data shared between English speaking nations, New Zealand, while the smallest, is still a major player. This has led to the conflict between Dotcom and Mr Key in the run up to New Zealand’s general election on thee 20th September, becoming a hotspot for the conflict growing between privacy advocates and the government intelligence agencies around the world, which many feel, in the aftermath of Edward Snowden’s revelations, are overstepping their boundaries.

KitGuru Says: What’s the verdict guys? Is John Key full of hot air, or do you think there’s a bit of a witch hunt going on in New Zealand right now?